I have been meaning to try whoopie pies forever, especially red velvet, and I finally found a recipe that looked like it had all the right elements for a good red velvet cake. It even came highly recommended, from Paula Deen's website. Claimed her cousin Johnnie's whoopie pies were loved all over Atlanta. 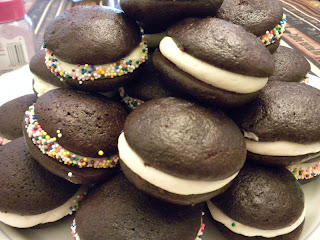 The first thing you may notice is that these are not red. I was shooting for a violet shade and I think I miiight have overdone it on the food colouring, so they came out quite dark. Oops. 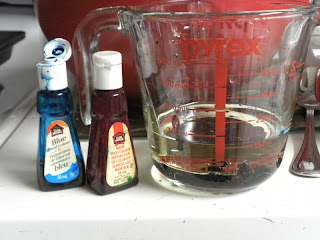 I started out with this recipe, but as I was reading the comments I saw a lot of complaints that the batter was too thin, that the oil - according to Deen's own show, should have been a much smaller amount than what was listed.

So... I reduced the amount of oil I used. We'll see how that pans out.

In any case, I first measured my oil, food colouring, vanilla and vinegar up in a measuring cup and put it aside.

Also, though I didn't get a pic of it, I sifted together my flour, cocoa powder (which I increased to 2 tablespoons because come on you gotta be able to taste it!) and the baking soda together in a bowl and set it aside. 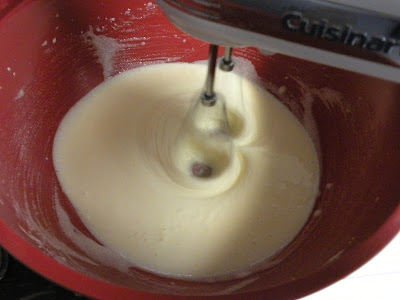 Then I blitzed up the eggs and sugar until they went pale and doubled in volume, like so: 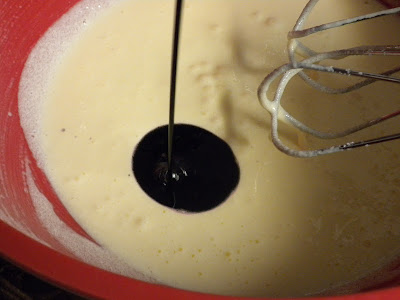 And poured in my much-too-dark coloured oil mixture and mixed until well-blended. 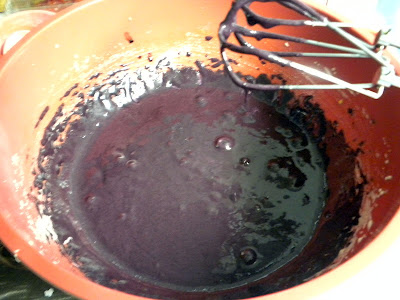 Like so. At this point, I thought I had the colour pretty bang-on! All that was left was to mix in the buttermilk and the dry ingredients in alternating batches, and boom - I had whoopie pie batter! 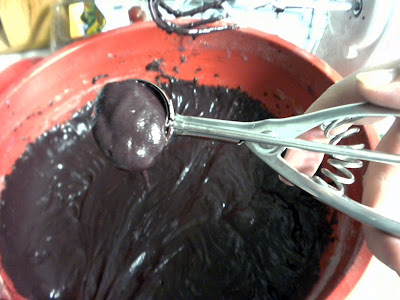 Now, here the recipe said to 'drop the batter by teaspoons' onto a baking sheet. Teaspoons? You know how tiny those pies would have ended up? This scoop holds about 2 teaspoons of batter, and these still came out really tiny! 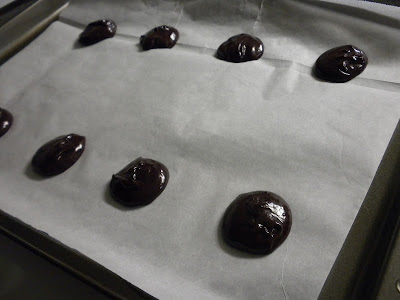 So I (mostly) obediently doled out the batter and baked as directed, and was rewarded with these: 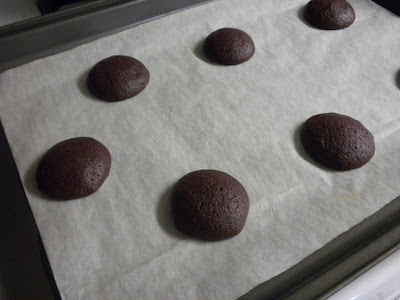 Huh, they look pretty okay, actually. Or, they did, until I moved them to the cooling rack and saw that the bottoms were especially crusty... and the cakes themselves were rather dry. 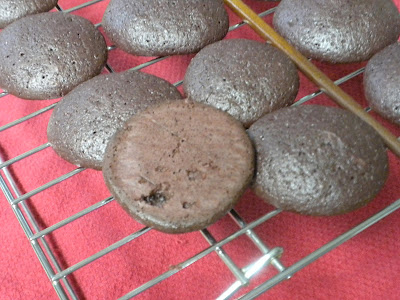 Yeah... Not good eats. So, for the next pan, I reduced the cooking time to compensate. I figured this was because I didn't use the recommended amount of oil. 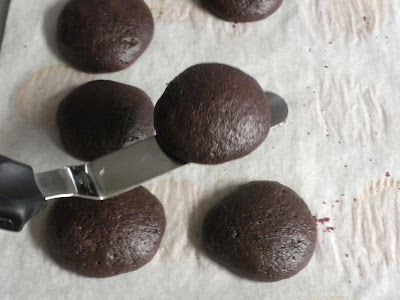 The second batch came out MUCH better, and I learned that the easiest way to remove these from the pan was with an off-set spatula. I tried with a fork, but it shredded the bottoms. 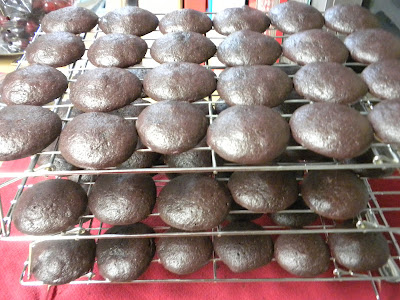 Time for another, 'Recipe vs Reality' - the recipe claimed this would make 48 cookies, for 24 sandwiches. I see here... 60 cookies. And this wasn't all of them! All told, I had over 6 dozen whoopie pie halves. No, really. I seriously lost count after 72.

Do recall, I made these bigger than the recipe called for. BIGGER. After reducing one of the ingredients. And it made MORE.

Someone messed up transcribing that recipe. Either that, or Paula Deen is lying to us, and I refuse to believe that! 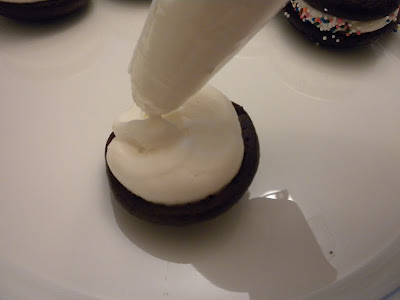 Anyway, once these had cooled a bit, I stuffed them with my favorite cream cheese frosting, and for extra fun, rolled some of them around in non-pareils. 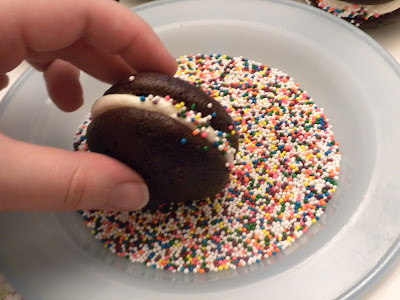 Everything is better with non-pareils. 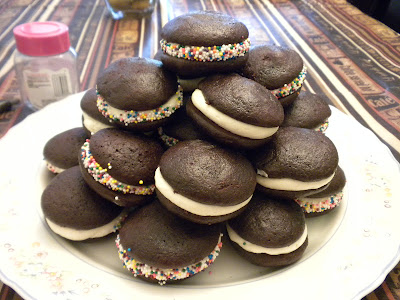 These went over pretty well with my guests, though I personally wasn't satisfied. They weren't terribly flavorful, were still ever-so-slightly dry, and they weren't nearly purple enough.

I'm not giving up though. I will persevere. One day, I will make the perfect whoopie pies.

What is with me and failing with any kind of pie?? These aren't even related to actual pie. What the heck, universe? 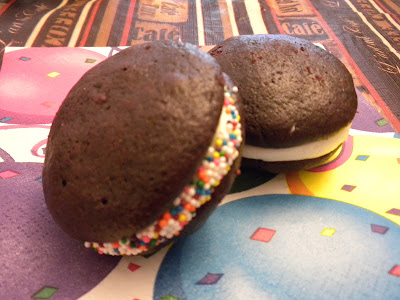 Despite their flaws, tho, they were awfully cute. And pretty tasty - especially with a generous amount of cream cheese filling. 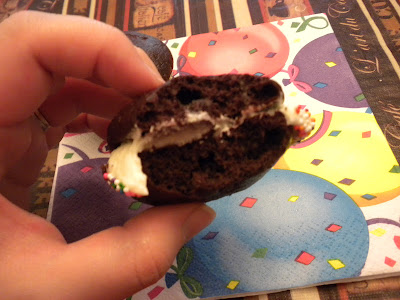 And I still ate, like, 7 of them. 7-ish. I don't know, I wasn't counting. It was my birthday, so... yeah. No-one counts servings on birthdays. I think. You shouldn't have to, anyway!

Do you have a favorite whoopie pie recipe? Suggestions on what I could have done better? Drop me an email or leave a comment!

Someday, I will master them, and have perfectly cakey little cookie sandwiches... someday.