I still haven't decided what I'm baking for my hubby this Valentine's Day, but I've been batting ideas around.
In the meantime, I made some Valentine-themed cupcakes! I took way too many pictures, as always, so this post will cover the baking part step-by-step, then I'll post about the decorating in the next few days.
So to start with, I dug another recipe out of Great Grandma's crumbling old cookbook. It was one I hadn't made in a while - as I mentioned before, I'm not a big fan of white cake, and this is the whitest white cake I know!
For all of you who can't read that somewhat blurry mess, the recipe, as I made it, is:
Silver White Cake
2 cups all purpose flour
1 1/2 cups sugar
3 1/2 teaspoons baking powder
1 teaspoon salt
1/2 cup shortening
1 cup milk
1 teaspoon vanilla
4 egg whites
Preheat oven to 350 degrees, grease and flour your baking pan as we have discussed previously, and start getting your ingredients together.
About those pans: I did grease & flour two 9" round pans because I am making 2 batches of cake batter, and only want 20-24 cupcakes, so I'm also going to bake layers and freeze them for a later use.
If you aren't doing this, just pop some cupcake liners into your muffin pan and go to town. 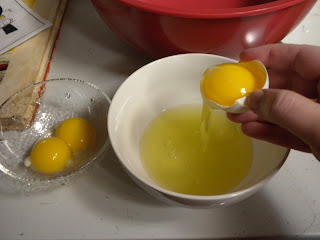 Reason one why I prefer yellow cakes - you don't have to separate the eggs! The actual separating isn't too hard, I just... I really don't like touching eggs and risking getting them everywhere.

So I just crack an egg as neatly as possible - on a flat surface, mind you. Cracking it on the edge of a bowl or pan may cause the shell to puncture into the egg and break your yolks, and then all is lost.

In any case, separate your eggs into a couple of bowls. Pass the yolk carefully back and forth between the 2 sides of the shell, letting the white fall into the bowl, then dump the yolk into another bowl. The smart thing to do is to transfer each egg white into yet another container before you start the next egg, this is so if you do break a yolk, you won't contaminate the whole batch.

I did not do the smart thing, but luckily the one yolk I did drop miraculously did not bust and I was able to fish it out.

An even easier way to separate your eggs is to actually drop the yolk into your cupped hand and let the white fall through your fingers into the bowl. I did not do this, because it feels incredibly gross. But it does work. I've done it before, then I had to scrub my hands raw to get rid of the lingering feeling of salmonella. (Does salmonella have a feeling? No? Well, it does now.)

Once your eggs are separated, dispose of the yolks (or save them for an omelette or a lemon curd or something) and start measuring out your ingredients. 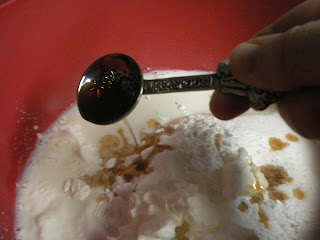 Measure all the ingredients out into your bowl, except the egg whites and 1/3 cup of milk.

Admire your incredibly cute teaspoon measure as you pour the vanilla. 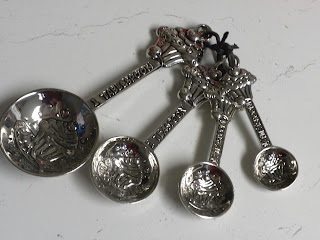 These sweet babies were a Christmas gift from a dear friend - no, not the one who just had a birthday, but one I've known even longer and - okay, I'm just giving them names right now. The friend who had the birthday shall hitherto and onwards be known as "Shanahan" because though that is not her name, it is what I always call her. She may or may not share a birthday with a famous sports dude.

Awesome friend who gave me these measuring spoons for Christmas (along with the sweetest little fondue set, but I don't want to get too off-topic) shall henceforth be known as "Kit." So with that said and done, did you see how the handles on these are little cupcakes?? And that there's little cupcakes engraved in each spoon? I didn't get a good picture of it, but see how on the fronts, the spoon stems say the measurements? On the backs, there are the cutest little hearts! I almost felt bad getting these dirty.

They are definitely the #1 cutest baking accessory I have. So, thank you Kit!! 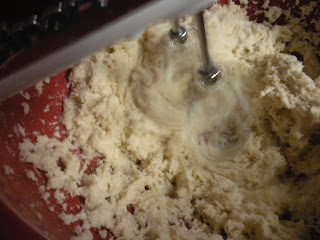 So now that you've got all the ingredients in the bowl - except for the 1/3 cup milk and the egg whites, which are keeping each other company elsewhere on the counter - mix on low speed for about 30 seconds just to get it incorporated, then blitz it up on high for 2 minutes. Scrape down the sides of the bowl with a spatula frequently during all this mixing so you don't end up with random unmixed chunks. It will look quite thick and a bit fluffy when you're done. 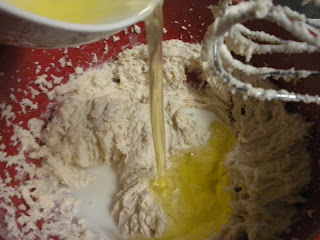 Then we can invite the rest of the milk and the egg whites to the party, scrape down the sides of the bowl, and give it another 2 minutes on high speed. 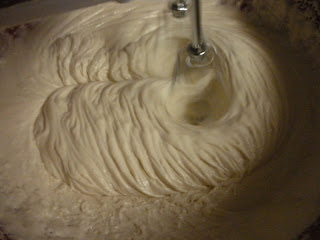 Mmm, smooth, sweet, and oh-so-pale. This batter is ready for baking! 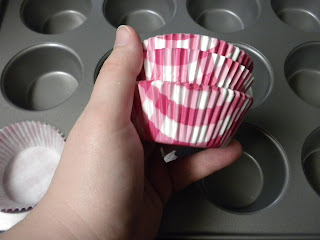 I found these adorable cupcake cups at - of all places - Dollarama! I couldn't believe I could get cupcake cups this pretty for so cheap. I'm not usually one of those girls who squeals for pink and frills, but I guess thinking about Valentine's Day does that to me. 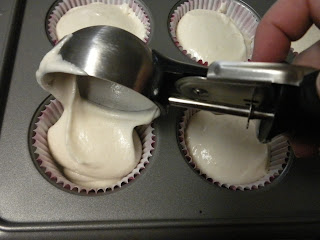 I used an ice cream scoop to measure out the batter, but I accidentally overfilled some of the cups this way, so uh, don't do that. 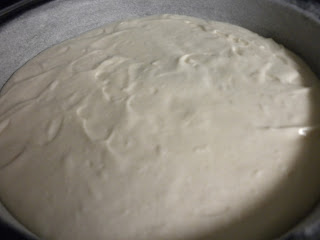 I didn't forget about my layer cakes - I made sure about half the batter made it into the round pan.

Next up, like the title says, this is cupcakes 2 ways, so I thought I'd try a recipe I keep seeing around the interwebs - Red Velvet. Now, red velvet originated in the Southern States, and only recently has it become popular elsewhere. Your average Joe here in Ontario, Canada, still has never heard of it - unless they're the type that reads baking blogs and sites with American content. Or watches cake shows.

Moving right along. Bakerella recently did a wonderful Valentine's Day cupcakes post, where she made cupcakes that had little Cupid's arrows through them. They were seriously too cute! Check out the recipe and her Cupid's Arrow design here.

I didn't have the resources to do that kind of decorating, but I wanted to try out her recipe, so here goes! 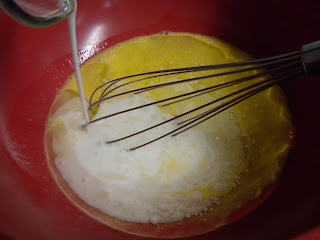 This is our wet ingredients - eggs, buttermilk, vinegar, oil (a whole cup of oil! Dang) and eggs. 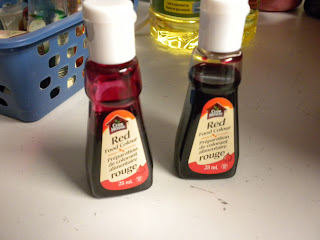 And oh yes, red food colouring! The recipe called for 1-2 ounces of the stuff. I've made red velvet cake precisely once before, from a different recipe, and used all 2 ounces of the colouring. It was bitter with the taste of the food dye. This time, I used about 1 1/4 bottles, and as you'll see, it still came out vibrant red!

In a separate bowl, whisk up all your dry ingredients and then pour the wet into the dry. 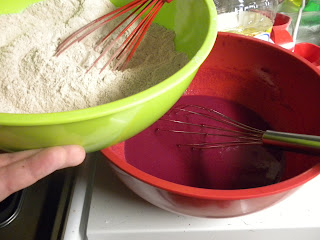 Uh... I might have put the dry ingredients into a smaller bowl. I was doing all kinds of not-so-smart things this day! I debated pouring the dry into the wet, but worried it might cause some kind of nuclear apocalypse, so I just dealt with the smaller bowl and poured the wet ingredients into the dry. It just fit into the bowl with enough room to mix! 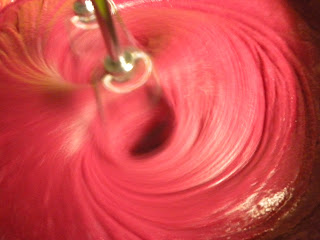 Oh, look at that rich, shiny, satiny, red batter. I wish this image was large enough to be my computer background. 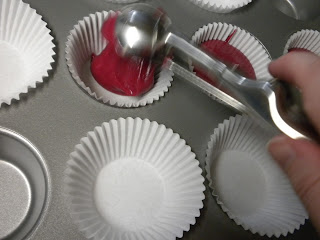 For the red velvet cupcakes, I went with plain white cupcake liners, and used 2 smaller scoops of batter to fill each cup, to try to avoid the overfilling issue I had with the silver white cake. 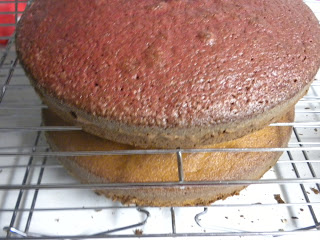 Again, I didn't forget about the layer cakes! They baked after the white cupcakes, and before the red ones. After letting them cool for a few hours, I wrapped them up in plastic wrap, then aluminum foil, and put them in the freezer.

Still debating what I'm going to do with them.... 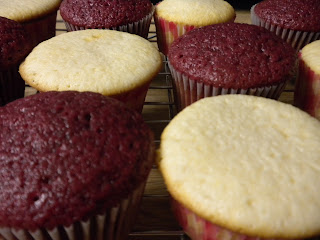 The silver white cupcakes came out a little flat... I don't know why exactly, I'll have to experiment with ways to make them rise more nicely. The red velvet looked absolutely perfect. Now all I had to do was think of a worthy way to decorate them.
But instead, I put them away and went to sleep. Which is also what I'm going to go do now! This post has been a bit of a marathon already, so stay tuned for part two, our thrilling conclusion of Cupcakes Two Ways.
Well, I mean, as thrilling as reading about me frosting cupcakes can be.
Until then!
By Baker in the Basement at February 10, 2012