So an exciting, sad, wonderful, bittersweet thing happened today.
My workplace supervisor and good buddy, Deon, left for a 4-month leave. I only found out it was happening last week, and I scrambled to put together an appropriate set of cookies for the event.
By the way, if the name sounds familiar, I have mentioned Deon before. He was the one who suggested the jam-filled cookies I made back in this post. So I kind of owed him one. 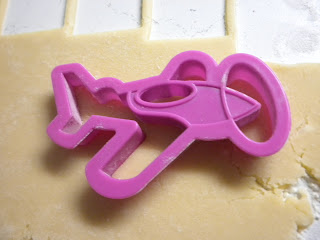 First thing to know about Deon's leave of absence: he is flying away somewhere. So thing one was to make airplane cookies. As you can see, this cutter is more an old-time, fighter-jet type deal, so I had to alter it a bit to make it look more like a commercial plane. 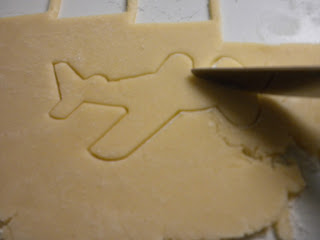 I quite simply cut away the 'propeller' bit, forming a pointed front on each plane. 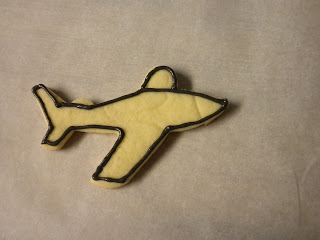 Once baked, I used an Ateco brand #2 tip to outline the cookie's parts in black-tinted royal icing. Next time I make royal icing, I'll be sure to whip up a quick tutorial with it. On this occasion, however, I was just using leftover icing I had stored in an airtight container. 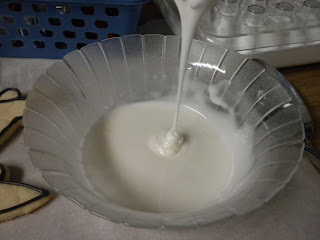 I took a portion of white royal icing and thinned it until it was something like a thick syrup, as above. Then I poured it into a freezer bag, and cut a small corner off. 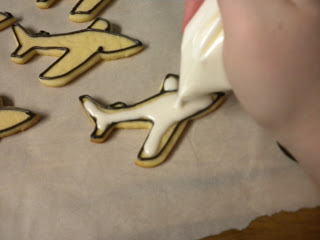 I carefully poured some of this thinned icing into each airplane outline, one to three at a time, and used a toothpick to draw the icing towards the outlines until they were all evenly filled. 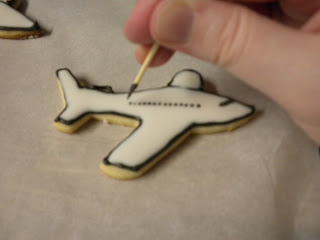 I let the icing set for just a few minutes, then used a toothpick dipped in thinned black royal icing to dab on the plane's windshield and windows.

Like I mentioned, Deon is a supervisor where I work, and he is the king of fancy high fives. You did a great job? High five! You brought in baked goods? High five! You happen to be walking by? HIGH FIVE!

So uh, I made little hand cookies that said HIGH 5! on them.

So guess where Deon is flying. 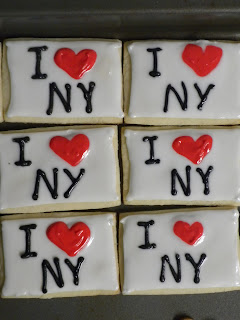 Now guess why he's going there. 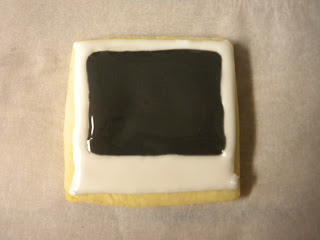 No, that's not a TV, he's not off to be a reality show star. No, no, not a computer screen. It's supposed to be an undeveloped Polaroid picture. These didn't turn out as well as I'd hoped, but the reason I made them is because Deon is flying away to New York City to take an educational internship in photography, his passion. 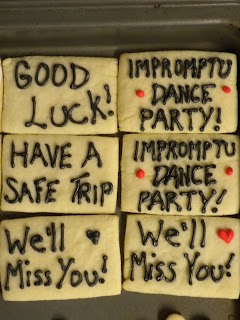 Oh, I guess I should explain that. I was having an absolutely awful day at work, when something good happened. It was just a small, shining ray of hope in my day, and I was so relieved to have a good thing happen on such a terrible day, that I stood up and danced a little at my desk when I thought no-one was looking.

Deon was looking. Oops. Excuse me while I die of embarrassment! He thought it was hilarious, and ever since, would regularly approach my desk all business-like, wait for me to look up from my work, and announce "IMPROMPTU MUCH MUSIC DANCE PARTY" which was the signal for all within earshot to dance like dorks.

Yeah, the office is about to be a lot quieter. 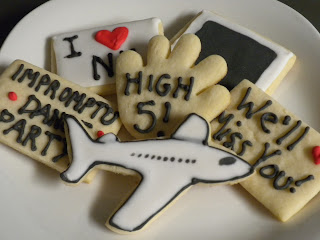 I packed all the cookies in a cute little box I got from the dollar store, which I somehow forgot to take a picture of, and brought them to work today. 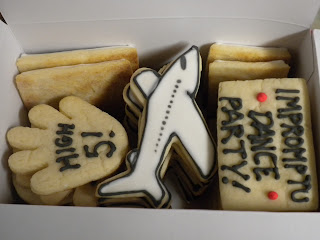 Deon loved them. He accused me of trying to make him cry. He was kind enough to share with everybody, too. What a guy.

So today was kind of bittersweet.

Another co-worker brought in an incredible chocolate-raspberry bundt cake for Deon, too, which completely blew my mind. I'll be pestering her for the recipe for sure, and when I get to try it out I'll be sure to share with you guys.

Since I'm talking so much about work, I should probably mention that my work schedule will be extremely busy starting next week, so it may be a little while between posts, but I'll do my best to keep up with things. Thanks so much for reading!