Hello again!
We're back with the thrilling conclusion of Cupcakes Two Ways! Our spine-tingling adventure started over here in part one, so be sure you've read that first. There's a lot of character development and drama and such in that first part, and, well, if you go and read this one first it's just going to spoil the whole thing.
So, if you've read part one, you know I'm a great big over-dramatic liar. There's that character development I mentioned.
Oh, and also I baked two kinds of cupcakes, and now it's time to frost and decorate them!
I am again sort of stealing from Bakerella - so poke this link here for her cream cheese frosting recipe. I only did a half recipe because by the time I was done baking the cupcakes, and my brother came by to visit, 4 un-decorated cupcakes had mysteriously disappeared. (The silver white cake only made 10 cupcakes, by the way, in case you're a stickler for math.)

In any case, I blitzed together the cream cheese and butter, above, then added my vanilla, below. 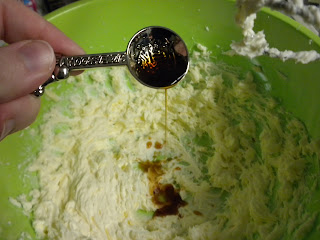 There's that spoon again! All together now: "D'aaaaaaaw!"

Yes, I'll get over the spoons eventually. Give me time. 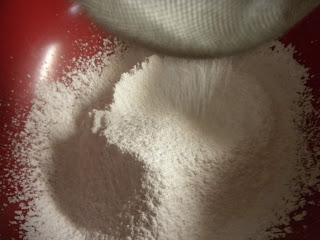 Next, sift your icing sugar in a separate bowl to sort out any lumps, and add it bit by bit to your cream cheese mixture, blending all the way. 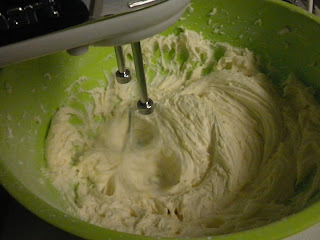 I must say, I was baffled when I first read this frosting recipe. Never, ever have I made a frosting that didn't include a liquid of any kind. No egg, no water, no milk, just fat, sugar and flavor. Part of me feared it wouldn't turn out well, but a much bigger part of me said to trust Bakerella.

And I'm so glad I did. This frosting, you guys. It is so good!

Next up, decorations! I hit my local bulk foods store and basically brought home anything and everything that I thought even might look decent on Valentine's Day cupcakes. 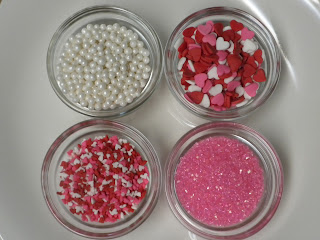 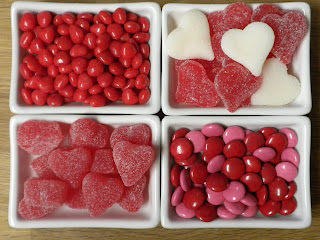 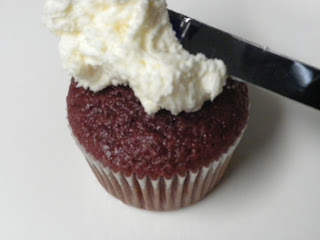 Friend Shanahan had suggested making a 'cloud' of frosting and popping two heart candies on top, I believe because when you're in love, your heart feels light as air. Or something. 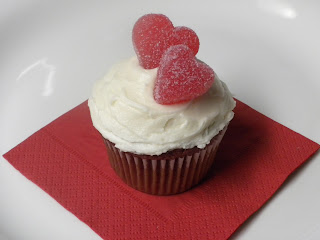 Anyway it looked super cute! Now all I can think of is that Phil Collins song, what was it? "Two hearts, sitting on just one cupcake" or something like that.
But it was still missing something... 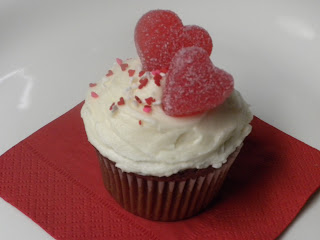 Tiny heart sprinkles fix everything.
Now, let me tell you, when I first sat down to sort through my photos for this post, I had over 80 pictures, just for the frosting & decorating step. I think I'm getting a little snap-happy with the camera. I eventually was able to cull all but my very favourite cupcakes to show you. This was very, very difficult to do, they were all so cute! 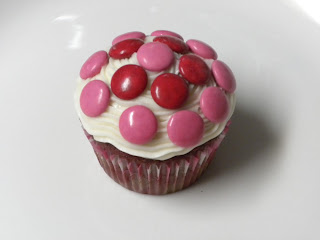 A simple spiral of cream cheese frosting piped on with a large star tip, with a simple pattern of Smarties over the top. I don't care what day of the year it is, more chocolate = more better! 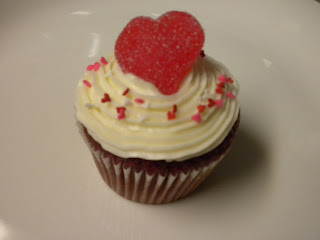 Just one heart gummy atop a cupcake. It would be lonely if not for all the tiny heart sprinkles. Maybe I went a little sprinkle-happy, too. 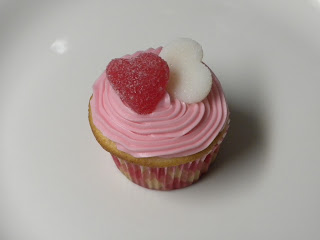 On the silver white cake, since I still had quite a bit of frosting left, instead of making a new flavor, I just tinted the existing frosting pink. I do wish I'd had some kind of strawberry extract on hand because that would have been just extra special, but I didn't think of that at the bulk store. Next time.

So uh, there's a cupcake with pink cream cheese frosting and two sour gummy hearts. (See, berry flavor would have gone great with the gummies. Hindsight is 20/20, and all that.) 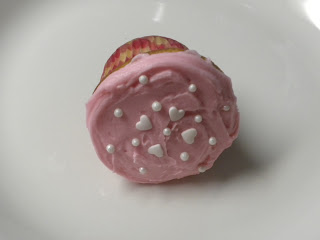 This one has a thick layer of pink cream cheese frosting with a simple pattern of sugar pearls and white heart sprinkles. I am probably ill-proportionately proud of it, but that's still not as proud as I was of this next one: 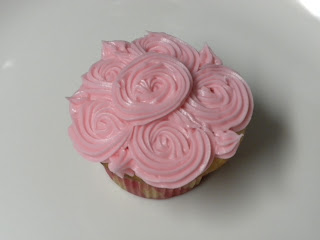 Anyone who's a big fan of Amanda over at I am Baker may notice a similarity here to her famous Rose Cake, and I freely admit it certainly took inspiration from her cake, though I hadn't read that post in ages. Reading it over again afterwards did give me some more ideas, though... but I'll be saving those for another day.

It should go without saying, but if you're not already reading I am Baker, Bakerella and Bakingdom, guys, you really should be. Fantastic blogs. Just don't compare mine to them because, well, I tried it and then I got kind of sad.

Know what cheers me up when I get sad? 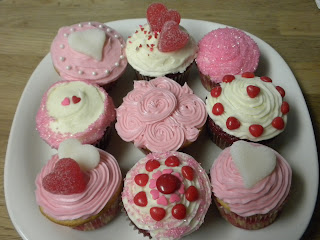 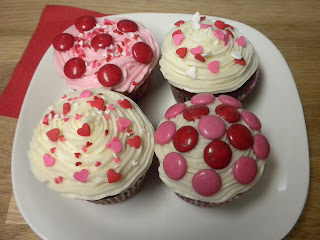 I would definitely do this again. I highly recommend the 'buy every candy that looks good and throw it on cupcakes' method of decorating, especially if you have kids who want to help in the kitchen. Would also be super fun at a party, set out your icing and sprinkles and just let people go nuts.

I know they're not the fanciest cupcakes in the world but they were a tonne of fun to make - and even more fun to eat. Now the question is, how am I going to top these for V-Day itself?

You'll just have to keep an eye out for the next post to find out.