Hello, friends. Have I ever mentioned what an absolute comics fanatic I am?

I am an absolute comics fanatic. And I don't just mean I read X-Men comics from the 90's (though I certainly do) but I mean I am mad about all kinds of comics, especially independent stuff that really breaks away from the traditional 'muscle-bound dudes in capes and skimpily-clad sexpots fight evil' stuff.

So, man, am I ever lucky to live in Toronto, where every year I can visit the Toronto Comics Art Festival and meet & chat up my favourite artists! This year, though, I was a little broke. Work had been scarce lately, so I couldn't go and purchase my usual metric tonne of new comic books and graphic novels.

I still wanted to go, though. But I needed to do something for my favourite artists. I would feel so bad just saying hello and not buying anything, and not doing anything for them. So at the last minute, the night before the event, I started decorating cookies. 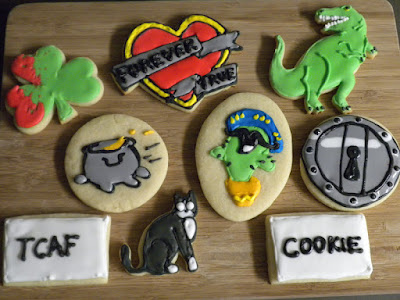 Unfortunately, since I was so short on time, I didn't get to do cookies for all my favourite artists, but I promised I'd make it up to those I'd missed at the next festival/convention.

Anyone recognise what any of these are? Well, if not, don't feel bad. I didn't expect there to be huge overlap between my lovely, baking-lovin' readers and us comic fans. I'll break it down for you though, because if you have any love for comics at all, my friends, these are among the best! 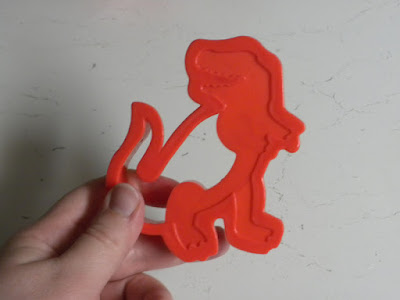 I've had a big 100-piece cookie cutter set for years, but only noticed the other day that this cutter bears an uncanny resemblance to a character in one of my favourite online comics: Dinosaur Comics! Written by the extremely witty Ryan North, this comic is basically the same 6 panels of clip art dinosaurs having ridiculous, philosophical, inspiring, and/or completely inane conversations. It is hilarious, and I cannot stop reading it.

Thus it began. If I was going to make a cookie for Ryan North, why, I needed to make one for everybody! 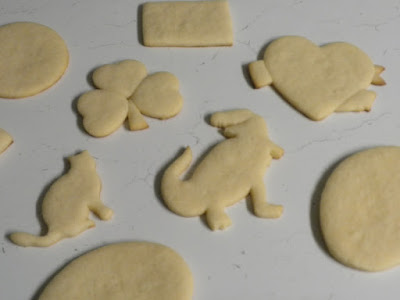 I had to get creative with the shapes for some of these. The T-Rex, cat and basic shapes I had, but the shamrock and heart-with-ribbon took some custom cutting. 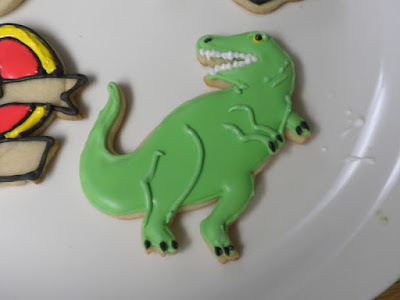 It took 2 tries to get the icing on T-Rex right. This still isn't an exact likeness, but the previous one, well, just be thankful I didn't bother with a picture. I don't wish to be responsible for your nightmares. 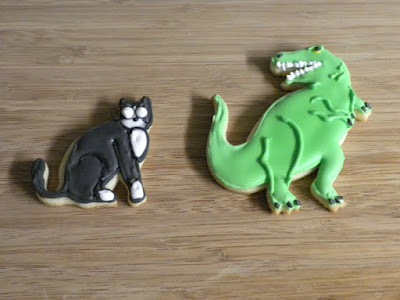 Wuh-oh, Cricket! Might wanna get out of range there. The cute li'l black & white kitty cookie is based on Cricket, Yuko's cat, from Johnny Wander. This comic is an autobiographic comic by and about Ananth and Yuko, and sometimes they show previews and snippets from some of their other work. It is funny, cute, and always charming. And gosh, I love that cat!

It is totally worth checking out. 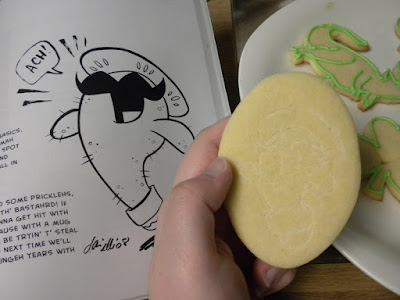 For this cheerful little cactus fellow, I needed reference since I was icing him onto a plain oval cookie. It's hard to see, but I used a toothpick to scratch out an outline to ice over. 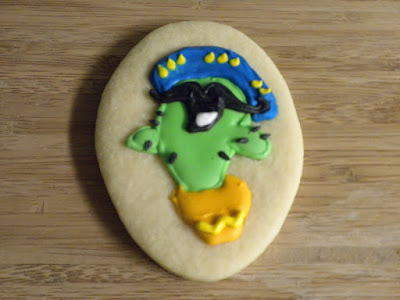 And voila! This my friends, is McPedro, the sassy talking cactus with a Scottish/Irish/Scirish accent from the brilliant comic Girls with Slingshots. The comic is about 2 girls, cynical Hazel and optimist sweetheart Jamie, and their groups of friends and adventures. It's meant for college-age or older readers, mostly, though, and is sometimes a bit adult, so if you're offended by frank talk about sex lives, ehhhh, maybe go read this next one instead. 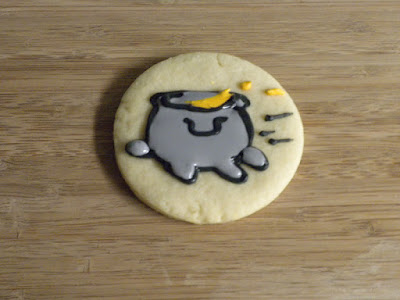 This little pot is called, well, Pot. He's the living, silent, loyal cooking device of the intrepid explorer chef Rutabaga! This is a relatively new comic by writer and artist Eric Colossal, but I am head-over-heels-in-love with it already. It's a cute, cartoony comic about a chef who tires of the usual fare and goes exploring for new and exciting ingredients in a fun fantasy setting. A probable PG rating on this one guys.

If you love fantasy, cooking, and humor, Rutabaga is an absolute must. 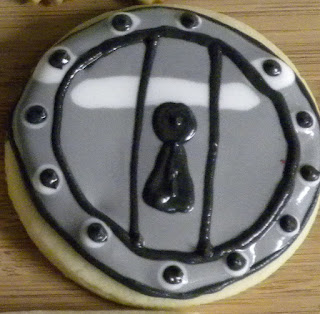 This is... eh... uh... pardon me while I dissolve into nervous giggling for a moment.

Okay, I think I have it out of my system now. I'm not going to link directly to this one, because I really want to keep this blog PG. Really I do. So, uh, if you don't mind a rating a bit higher than PG, highlight the space below.

This is from the amazing comic Chester 5000 XYV by the fabulous Jess Fink. This comic centers around a lonely young Victorian-era bride whose husband is simply too busy for her, er, needs. So he builds her a robot to keep her company. And boy, does he EVER!

So there are many naughty, naughty, explicit scenes of robot and non-robot love. Did I mention the entire story is told without dialogue? And done extremely well? And that the characters are relate-able, lovable, and that the story is compelling? And that the sexy scenes are really, really sexy?

Google it, my adult-entertainment-friendly friends. Chester 5000 XYV. Okay, back to cookies and behaving now.

And for those of you who did not highlight and are happy to skip whatever naughty info is hidden there, this is simply a fancy keyhole. Moving on. 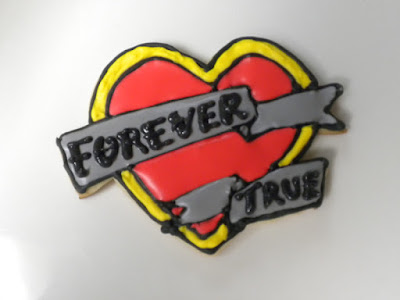 This is the symbol of the Sincerists, a fictional group of folks in the alternate universe crafted in Templar, Arizona. This group of folks tells the truth, all the time, no matter how blunt or brutal. I both love and hate them.

This comic is for adults, too, lots of swears and adult situations. It often deals with unhealthy relationships and substance abuse. And it. Is. INCREDIBLE.

The story centres initially around a young man named Benjamin who is trying to start a new life as a writer, in a new town. Then we meet his neighbours, and learn about the crazy, and yet entirely believable, world that Spike Trotman has written, illustrated, and brought to sparkling life. I don't want to give too much away, but it is a wild, emotional, hilarious, touching, disturbing ride. You've got to check it out. You will be amazed.

The only downside was, well, I messed up. Spike didn't come to TCAF this year, and I missed the memo. Oh well, guess I'll just have to eat this delicious cookie myself. Life is too cruel. 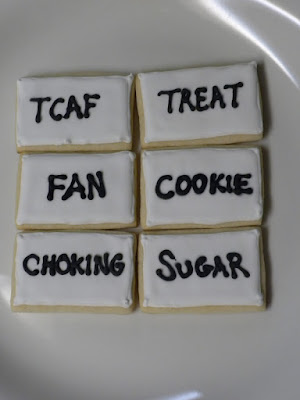 Well, gee, these cookies look kind of boring, huh? Just random words on blank white cards. But maybe they'd be more interesting if I told you that they were actually 100% accurate death predictions? Then what? What would the world be like if you could actually know, ahead of time, how you would die? This morbid yet fascinating scenario is explored in a soon-to-be-2-volume collection of short stories called Machine of Death.

I can't even explain it to you fully. If the above premise sounds at all interesting, just click the link. I will add, though, that the idea sprung from the head of the aforementioned Ryan North (in a Dinosaur Comic strip, actually!) and that David Malki ! (the punctuation is part of his name. I don't know, either) was a co-editor for the books. I shared the cookies between the two of them, and saved one to go with the following:


Hope no-one's squeamish. That's a shamrock spattered with blood. What the heck, right? Well, if you're an Irish ninja on a cold, cold, day, and you're all out of shurikens, sometimes a frozen shamrock just has to do! What the heck am I talking about? Dr. McNinja! It... it is exactly what it sounds like. A crazy, ridiculous, action-humor comic about an Irish-American ninja, who is also a doctor. His is a conflicted life.

And Chris Hastings, the awesome author and pencil-wielding-dude behind it, was also one of the many artists involved with the Machine of Death books. 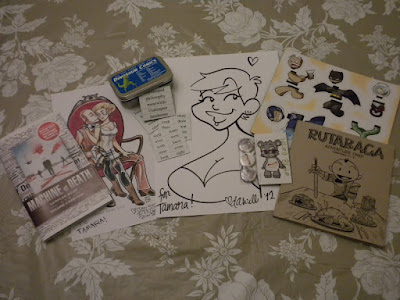 Despite the fact that I was trying to save money, I did bring home some sweet, sweet swag. A preview of the next Machine of Death book, a beautiful and sassy print by Jess Fink, fun sentence-building magnets based on Dinosaur Comics, a lovely quickie sketch of my favorite Girls with Slingshots character, and of course, volume one of Rutabaga! Which I have already devoured, and I hunger for more.

The magnets with the dress-up bear are from a comic called Sam and Fuzzy, which started as a comic about a cabbie and his talking bear friend, and evolved into something involving TV stardom, metal bands and their roadies, and a ninja mafia. That's the best I can do to summarize a comic that's been running 10 years! Also, I should mention it is fantastic. And that I suck and did not make a cookie for the creator, Sam Logan. But I will, next time he's in town, and it will be fantastic.

The little set of buttons is from a hilarious comic called Bear Nuts by Alison Acton. The best way I can describe it is... picture if the Carebears weren't about love, caring and sharing, and rather, were about self-medicating, or being lecherous, or crazed, or drunk all the time. Sound fun? I thought so. It is of course, not a comic for kids. I am SO looking forward to making the cookies for it though. Click over for a minute if only to look at how bright, cartoony, and wonderful her art is! It is going to make great cookies!

Okay, if you made it through all that, you are such a trooper! And you deserve to see something actually baking related.

I finally, finally got my hands on this book! 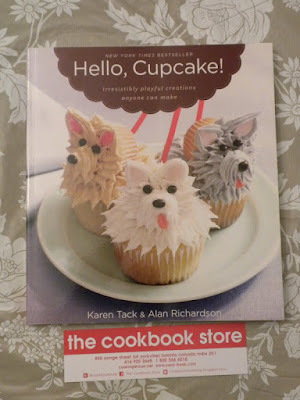 I have wanted this book since it was first mentioned on the Cupcakes Take the Cake blog oh so many years ago (at least, I'm pretty sure that's where I first heard of it, it's been a while!) and at last it is mine!

I "discovered" a little shop called The Cookbook Store, right across the street from the Toronto Reference Library, where TCAF is held. No-one ever told me there was such a thing as a store that sold only cookbooks! I would have spent hours perusing if my poor brother wasn't waiting impatiently outside the shop for me.

If you're not in the Toronto area, you can of course find Hello, Cupcake! online.

Now, if you'll excuse me, I have some comics and a cupcake book to read. I cannot wait to make more comic cookies, and goodness knows what kind of cupcakes I'll make next!

Coming soon for sure, though, is a how-to on royal icing, and possibly a post about lava cakes? Can't decide, just now... must read about cupcakes!