So, once upon a time I promised to bake something super awesome for my husband, and then I got caught up in life and work and such and never actually got around to doing so.
The more time passed, the more awesome I thought the baked good would have to be to make up for the wait. The problem there is, by the time 3 weeks had gone by, I was convinced that only a home-made pecan pie would be enough. And I have never made pecan pie. Heck, I've never successfully made a pie crust.
So I spent a few hours tracking down the most reliable, fool-proof recipe I could find, and I finally settled on this recipe from Food Network. Tested and approved by the Food Network kitchens! So, probably I can't screw it up.
Probably. One of the things I liked about this recipe was that I had the option of using a food processor. In the past, I've tended to overwork my pastry, or get it too warm in my hands, melting all the butter and making it too tough, so I hoped the food processor would alleviate some of that.
As per the instructions, I pulsed together the flour, sugar and salt, then added the butter and pulsed it together until I got this: 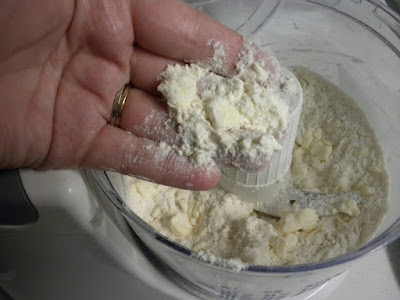 The pieces of butter are supposed to be 'bean-sized'. I'm sure there's some bean out there that's this size? I kind of wish it had been more specific... 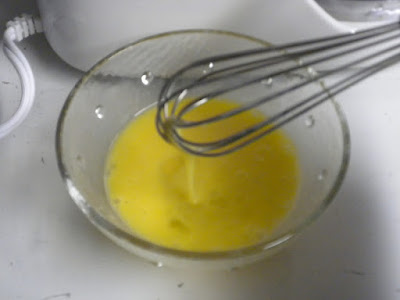 Next, I added a lightly beaten egg to the mix, and pulsed again until it looked like this: 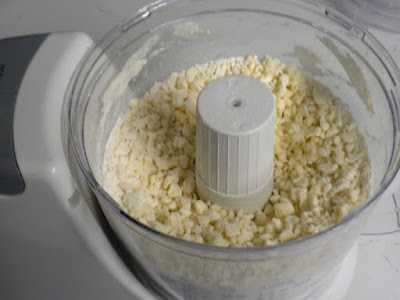 And since the instructions clearly state to not actually let it form a dough in the processor, I had to at this point pour it out onto the counter and form it together by hand.

With my hot, hot hands. I tried my best not to melt all the butter. 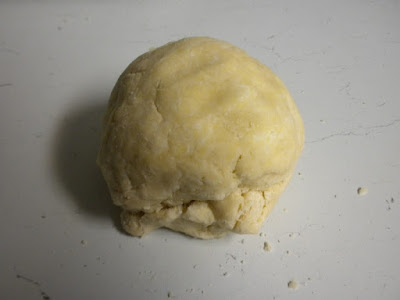 Once it formed a dough I shaped it down into a disc, wrapped it up in plastic wrap and chilled it for over an hour. Well over an hour, in fact, since I didn't have the energy to finish the pie that evening, so the dough chilled overnight. 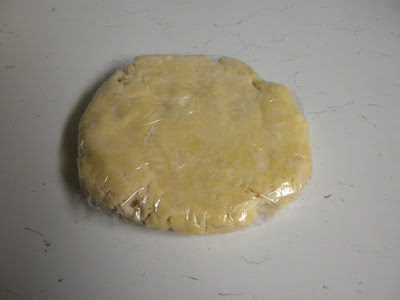 The next day, when I had again worked up the courage to work on the pie, I took out my dough disc and attempted to roll it out in a large circle. 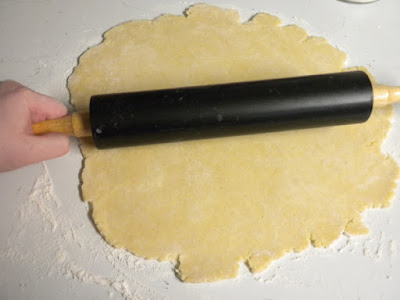 Again... 'attempted'. It kind of came out a big lumpy square. I tried to make the best of it. And you know, once I had it in the pan and did my best imitation of fluting the sides, it actually looked a lot like a pie shell! 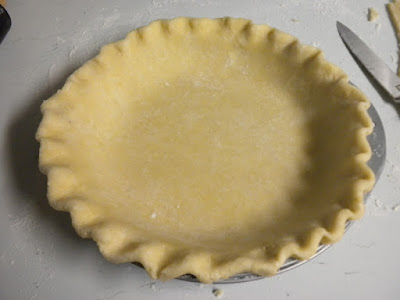 Yaaaay! I had not yet realised my fatal error. Can you see it, kids at home?

(Sorry, too many cartoons again.) 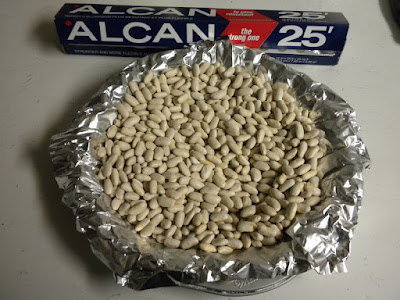 So, I lined this decent-looking-to-me pie crust with foil and weighed it down with dried beans to do the first round of baking. The beans are so the pie crust won't shift around or bubble up too much during baking.

So, while that's doing that, it's time to make the filling. 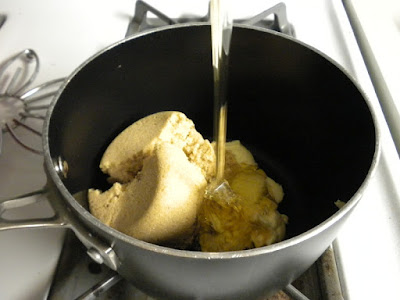 That, my friends, it brown sugar, a ridiculous amount of butter, a bit of salt, and a stream of corn syrup gettin' together in a medium sauce pan. You have to stir this, constantly, over medium heat, for however long it takes to reach a boil, then boil it for about a minute. 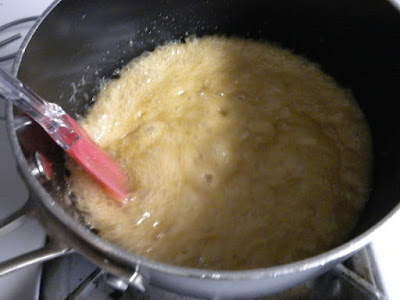 Then you'll have something that looks a bit like this.  Then, you want to stir in your pecans, and a bit of each of these guys: 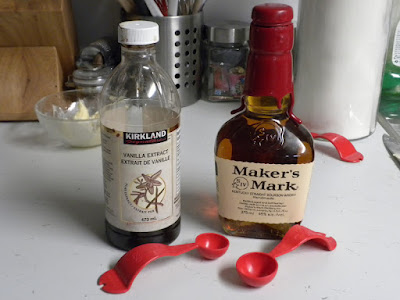 These two are going to be BFFFs, I can just tell (that's Best Flavor Friends Forever, by the way.) I'd never in my life bought or tasted bourbon before this, and I still haven't tasted it straight up but I gotta say, the scent of this Maker's Mark stuff is just amazing. And such a pretty bottle... I didn't even want to open it! But, alas, we must make sacrifices in this life. 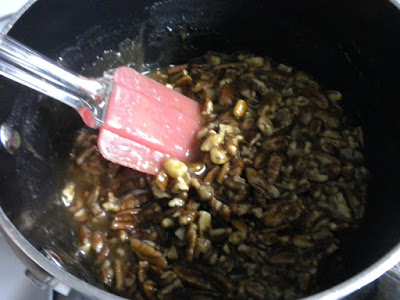 Once that's cooled for 5 minutes or so, you can beat in your eggs, and then voila! You have pie filling. It was actually much easier than the crust part! 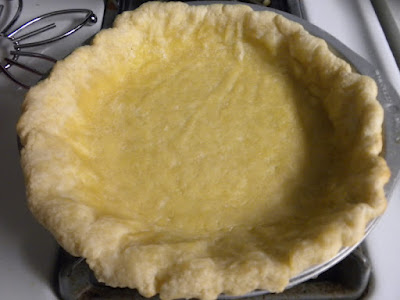 So you see the fatal error yet? When it came out of its par-baking oven stay and I removed the foil and beans, it was obvious that I'd distributed the crust unevenly. On one side there was a big crusty overhang, on the other, the crust had shrunk back from the side and was lower than the edge of the pan!

Well, I had no choice but to forge ahead, so I poured as much of the filling in as my lopsided crust would hold, and baked according to the instructions. 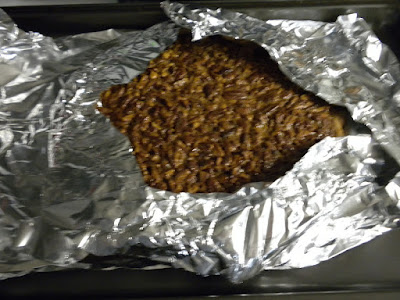 I even pulled the pie out halfway through to add a protective layer of foil to the outer crust. 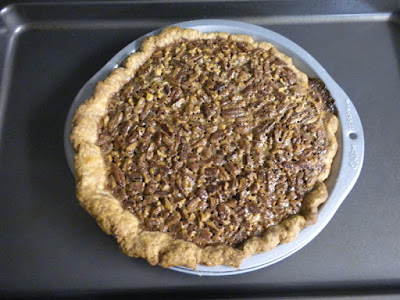 And... this is the finished product. That lopsided crust is really, painfully obvious now. Urgh. Also, my oven is not as fancy as the sophisticated Food Network kitchens' must be, so maybe I should have taken the pie out a little earlier than instructed. The top of the filling got a bit too crunchy, and the crust came out a little dry.

Well, it was my first attempt at this variety of pie, and really, it wasn't a total loss. The best solution to a dry crust is, of course, a healthy scoop of vanilla ice cream! 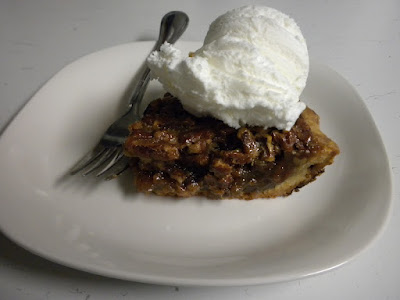 Heck, even if your crust comes out perfect, put some ice cream on that. It really helps to balance the incredible richness of the pie filling. By the way, you don't really taste the bourbon in this, but you can detect a certain aromatic sharpness to the pie that really brings out the flavors of the pecans.

Would I attempt to make this pie again?

Totally. Would I steel myself up and make the crust from scratch again?

Maybe. Maybe if I sample some of the bourbon first.

I don't know what my next baking adventure will be, but I'll post whatever it is next Thursday, so stay tuned!