In that I made some marble cakes and they turned out just fine. I made a giant cupcake for a dear friend (I haven't yet figured out which of her many nicknames I should refer to her as, so she remains 'dear friend' for now, heh) and a regular layer cake for my brother with a special frosting design, and we had a little double-birthday get-together to share them with everyone.

As we cut and served the cakes, people kept asking:

And I had to laugh. And maybe it was rude of me to laugh but you have to understand - it is the easiest thing ever. Anyone can do it! I will show you.

Start with your favourite white - or yellow like I've used here, since I prefer yellow cakes in general - cake batter, and a separately prepared bowl of chocolate cake batter.


I'm obsessed with making things from scratch so these are from the ol' family recipe collection, but you could use cake mix or whatever recipe you like.

Prepare your pans. I often go the fast & easy way and just use non-stick pan spray, but I find more and more that I end up with hard, crunchy cake edges that sort of shrink away from the sides of the pan. If anyone's seen the Reese Cake post, you may also notice things often still stick to the pan. These were special occasion cakes I was making, so I took the extra precaution of greasing & flouring them.

It takes a little longer, and it makes a bit of a mess, but I was hoping it would be worth it when it came time to de-pan the cakes. So, I took a paper towel smeared with Crisco and rubbed it all over the pans, then dropped a couple of tablespoons of flour into the first layer pan. 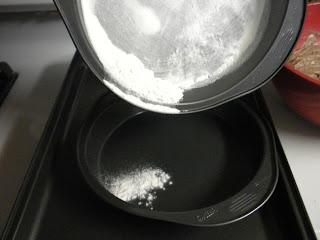 I held it over the next layer pan as I rotated and tapped and shook the pan about to get the flour all over. You'll and up with a thin coating in some places and chunks of flour in others, but that's okay! Once there's no shortening-coated pan left unfloured, turn it upside down over the other pan and give it a couple smacks. 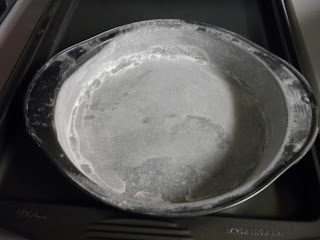 Voila. A thin coating of flour over your pan. Repeat for the other pan, but when you give that one its final smack, hold it over the garbage, or a large bowl if you wish to reserve the flour because you're making more than one cake.

I was, of course, making two cakes so I tried to tap the excess flour off into the giant cupcake pan, but, well, that's where the 'bit of a mess' part comes in. I had to wipe up a lot of spattered flour when I was all done, let me tell you. 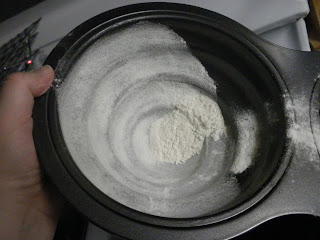 Getting the flour all over the inside of the greased cupcake pan, and NOT getting it all over my kitchen proved  a task simply too great for me. Next time maybe I'll do it over my largest sheet pan to avoid another flour-pocalypse. 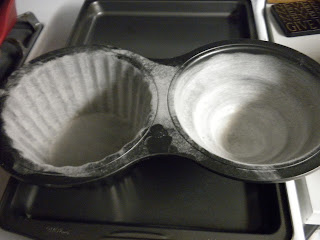 Once your pans are all floured, it is marblin' time! (That sounds like a really, really lame super hero battle cry. I'm going to use that now.)

So, take about a quarter of your yellow cake batter and plop it into the pan at random-ish intervals. You don't want a smooth layer of cake batter here - you want random blobby clumps. Then just plop some chocolate cake batter down between and over them. 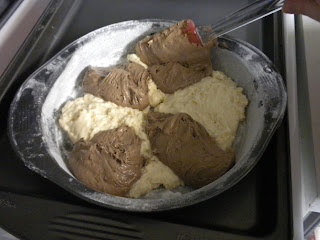 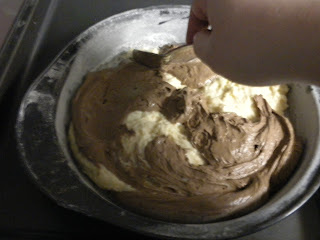 Now take a small spoon and gently swirl it through the batter, round & round and back and forth until the batters look, well, marbled. You want to avoid hitting or scraping the sides & bottom of the pan or you'll mess up the flour layer, and try no to over-swirl it or it really will turn beige!

Once it looks swirly, use your spoon or a spatula to smooth the top out. 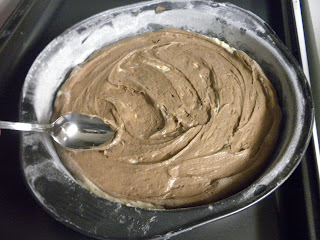 At this point, I worried ever-so-slightly that I had ruined the marbling, but only the very top was covered in a chocolate layer, the lower bits were still marbled nicely. Repeat this process for the other layer. I personally switched it up and put the chocolate batter blobs in first this time. 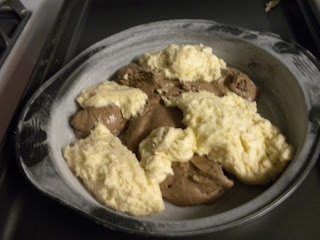 After swirling & smoothing, the marbling still showed through the top. I'll probably do it like this from now on. 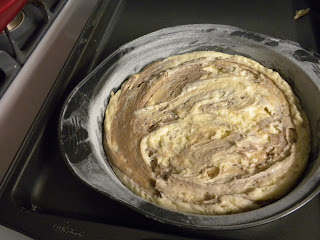 I repeated the whole process for the giant cupcake. The only difference was that, because this pan was so deep, I had to put a few blobs of each batter, marble it, then put more on top and carefully marble that. If I'd put all the batter in at once, I don't think I would have been able to marble them without completely destroying the flour coating. 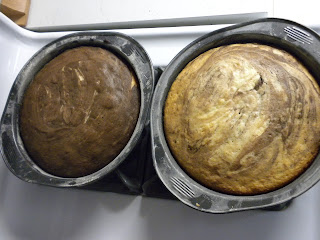 Then I followed the recipes' baking directions for layer cakes, and they came out gorgeous! 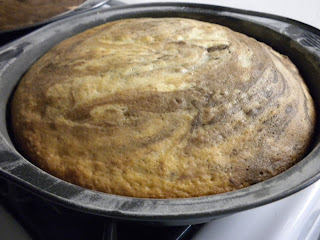 So swirly! At first I thought my giant cupcake had come out perfect too... 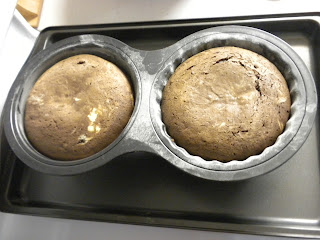 Aw, nuts! The depth of this pan not only complicated marbling, it complicated baking! The 'top' portion of the cupcake cake was actually perfectly baked, but the 'bottom' bit was still mostly liquid in the middle! I had to extremely, extremely carefully tip the pan to extract the cupcake top while trying to keep the bottom in place.

I managed to get the top half out to cool, then turned the temp down 25 degrees on the oven and baked the bottom for another 20 minutes. Oy. 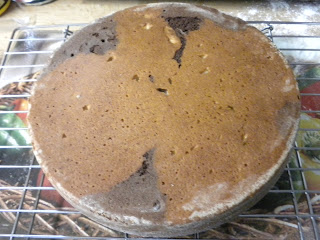 Why am I showing you this kind of uninteresting cake bottom shot? I mean, it's just a smooth, slightly floury cake bottom.

That didn't stick to the pan. That popped out perfectly when I flipped it over. That's why! The shortening & flouring mess is now justified! All the cakes popped easily out of their pans with a gentle shake & tap. Amazing. 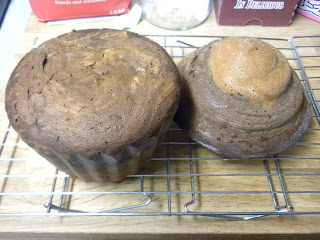 When the bottom was finally baked I set it out to cool... and noticed I had definitely dented it when I took out the other half of the cake earlier. Well, nothing a little trimming can't cure.

I'm actually going to call this post done for now since I really just wanted to talk about the marbling and oh my goodness this got way longer than I meant it to! So thank you for slogging through this long post, and keep an eye out for part two where I actually put some frosting on these things and serve 'em up!