Ducks from the past

Hey all. I feel pretty lame for letting the blog slip behind in updates already but let me tell you why.

Really though I have the head cold from hell and until it struck I'd been keeping extremely busy helping a friend redo her apartment and I just had no energy or drive at all to bake. And if you knew me personally you would know that that is a very, VERY strange thing.

So I at least wanted to share something with you, and I dug up some old pics from my brother's last birthday: 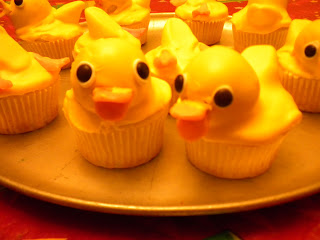 Duck cupcakes! (Duckcakes? Cupducks? Hmm.)
See, my brother's nickname is Duck, so when I saw these in the cupcake book I got for Christmas 2010, I just knew they were the perfect thing for his birthday party. He was turning 20, but hey, you are never too old for adorable cupcakes!
If you want full directions on how to make your own, well, you'll have to invest in a gorgeous little book called What's New, Cupcake? Check it out on Amazon: http://www.amazon.com/Whats-New-Cupcake-Ingeniously-Occasion/dp/054724181X/ref=sr_1_1?s=books&ie=UTF8&qid=1327616514&sr=1-1 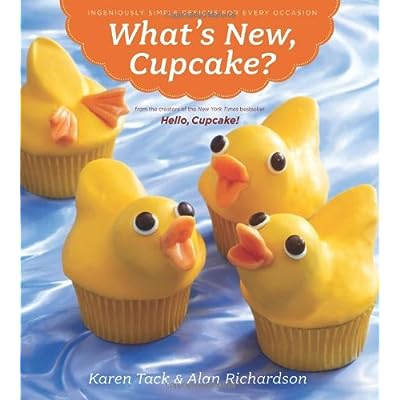 And clearly, whoever made the duckcakes on the cover did not have nearly as much trouble as I did.
If you're going to do these, my one tip is: When you're inserting the beaks (which are made from smushed up and re-shaped Starburst candies) use a small knife to make a dent into the head to insert the beak into. This was the only way I found to keep the beaks from constantly falling off.
Even then, there were some casualties. I had to eat a few to hide the evidence. The noble sacrifice of those first ducks will not be forgotten. 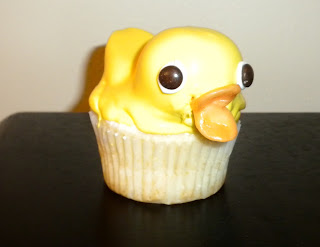 Here's one of the better specimens. I call him Lumpy. (I also have to apologise for the terrible quality of these photos, they're even worse than my usual!)
The cup cakes are made from my favourite Bonnie Butter Cake recipe which I will likely share sometime next week. See, I have 2 cakes to make this weekend, one for my friend whose apartment we've been working on, because her birthday just went by this week, and one for my brother because this coming Monday he's turning 21! My, how time flies.
This year he's expressed interest in cakes featuring everything from Batman and the Ghostbusters to Weird Al Yankovic and My Little Pony. I don't know what I'm going to do, but I'll have to figure something out fast!
Oh, I should mention that Duck actually goes by the name PsychoDuck21 on the internet, and for a long time his icon was a giant rubber duck frothing at the mouth.
So I made a very special duckcake just for him: 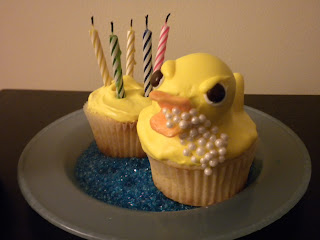 Well, I hope that'll tide y'all over until I'm well enough to bake up those birthday cakes and take some good pictures. Right now I'm a little loopy what with the head cold and the crazy strong cold meds I took to fight it.

That Mr Buckley is hardcore.