Let's start things off with a... Failed cake?

Hello all! My name is Tamara and I'll be your Baker in the Basement for the evening.

Or, uh, until I'm done? In any case, moving right along:

I love to bake. It's my one true passion in life. I have just a tad of training from some part-time courses and a lot of home-baking experience, but I'm not going to sit here and bore you with all that. Not this post, anyway.

For this post, I'm just going to say that I live in a basement apartment and I love to bake, and one day I hope to truly claim the title of baker. But for now, here's a cake that turned out all wrong! 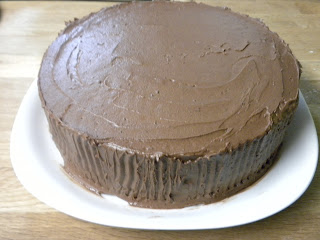 This was supposed to look like a big Reese peanut butter cup, as requested by a friend of mine. I should clarify: a friend I've had for over 10 years. A friend who was also my boss at the time since I was helping out with the busy season at the store he manages.

A friend who I right-out slapped because he was bugging me after a long day at the shop. Yup. I felt pretty awful about that and he took advantage of my guilt to weasel me into making this cake. So what went wrong? Well, let's start at the beginning.

Now, I didn't get pictures of mixing the batter (hey, I'm new at this blogging thing!) but that went pretty well. I just altered a yellow cake recipe to include peanut butter - something I'd done a few times before. This time, though, I decided to add peanut butter chips because I wanted to make the cake extra special!

That was mistake number one. 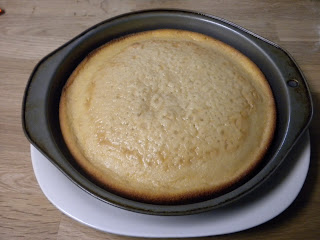 So... first off, right out of the oven, I could see that the top of the cake was a little bubbly-looking... I later realized I had over-mixed the batter. Mistake number 2. But, still, the cake looked moist and well-baked and at this point I thought all was well, until: 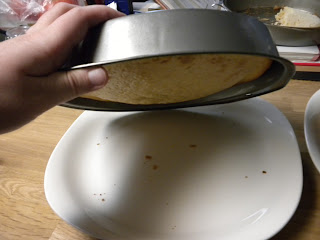 Oh, pants. It would not come out of the pan. Both layers were terribly stuck. I'd greased the pans well, I'd baked for the appropriate time, what went wrong here? 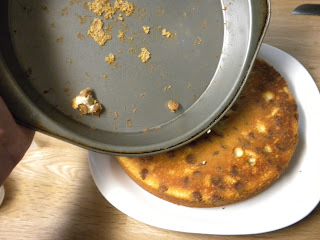 Oh... THE CHIPS. They all sunk to the bottom and clung to the pan like vengeful little barnacles. Yay.

Well, I eventually managed to wrench both cakes from their pans relatively intact and trimmed them down to be level. 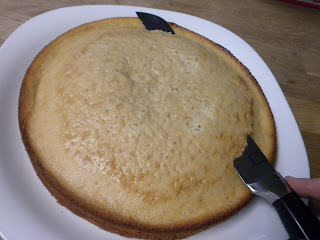 Once trimmed, I added the first layer of frosting. 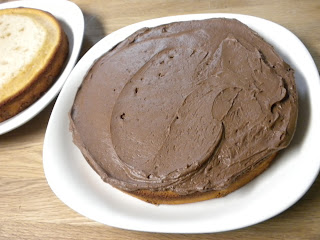 I have decided that next time I attempt this cake, I'm going to go with a smoother, glossier chocolate frosting. This cocoa butter cream was a little too rough around the edges. 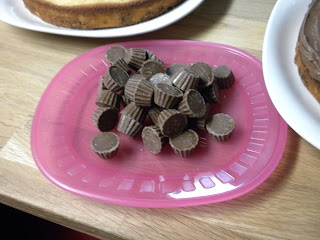 The next step was to take these little babies and press them into the middle frosting layer, like so: 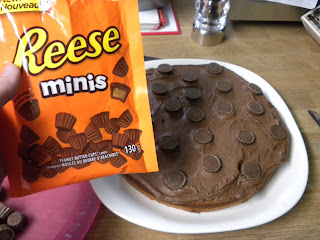 Now, I'm not going to number this one as a mistake, but I thought these guys were going to be, well, mini-er. So next time I'll have to account for their size a little better - might chop 'em up some so they'll fit into the middle layer better. 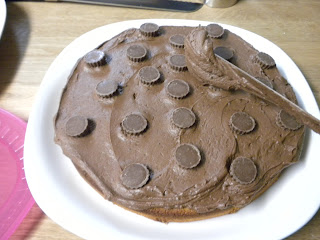 As you can see, I had to top it off with extra frosting to level it out. 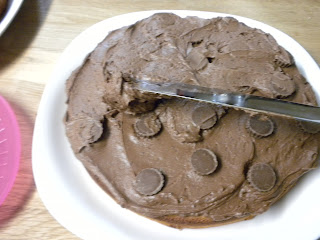 A LOT of extra frosting!! 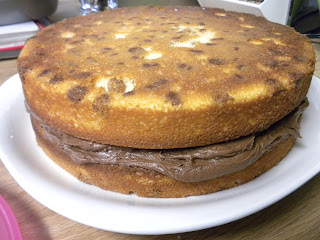 Stacked 'em up and slathered more cocoa frosting on there. 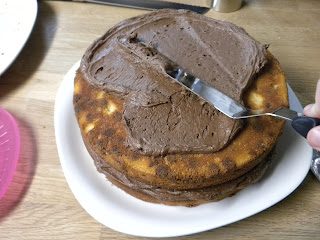 Now, I had a vision in my head for the sides of this cake. Nice, wide, vertical furrows just like on the side of a real Reese cup, only bigger! I even had the perfect cake edger in my drawer.

The right size and angle, I knew it would be perfect! If only I could find the darn thing.

To be fair, I did find the right edger. The next day. After the party where I served the cake. So, in the meantime I had to use this less-appropriate edger. 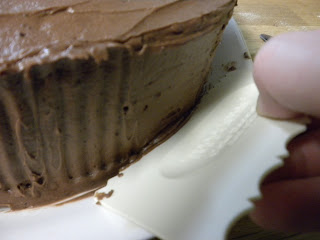 I still got decent striations, but it just wasn't what I'd pictured. 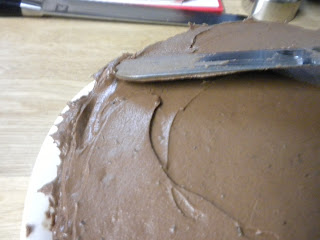 Did my best to smooth out the top, but, again, the frosting wasn't really working with me. 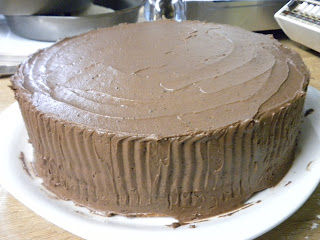 So here she is, complete, a little wonky, and a lot messy. Mistake number - what are we on now?? - was to put this on completely the wrong kind of platter. The edges were raised and it made it practically impossible to get a clean plate edge without digging into and damaging the cake.

So. There you have it. 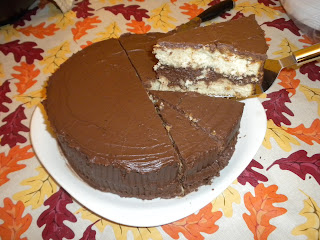 Now, despite all the little mistakes and mishaps, this cake went over incredibly well. I was officially forgiven for the face-slap. The cake was devoured by all present at the party and the unanimous vote was that it was moist, delicious, and not nearly large enough.

I'd like to make it again, with all the little notes I've made here in mind, and see what I can really do. But that's for another day.

Why did I start this blog with such an iffy post? Such a low note? Because I wanted to show a true picture of where my skill is right now, and that I'm definitely still making mistakes. But mistakes are important! Mistakes are how we learn.

I want to look back at this post sometime down the road, and see how far I've come. I want to figure out how to keep the chips from sinking (tossing them in flour before putting them in the batter has been suggested)  the frosting that will look like real chocolate when it sets, and how to get the perfect furrows up the sides.

And when I can do all that, I'll still know exactly where I started.

Thanks for coming along with me for this journey - it can only go up from here!

Now if you'll excuse me, my banana bread is just about ready to come out of the oven, but that's another post.
By Baker in the Basement at January 12, 2012