We're gonna do something a little different today.

My pal Kit and her fiance took me and hubby out for sushi this past weekend. Sushi is one of my very favorite foods in the entire world. Yes, I love good quality sushi even more than I love cookies and cake. I know, it's crazy.

So anyway, we had an absolutely amazing lunch and while we were all in the Asian cuisine mode, we headed to our local Asian markets to do some exotic candy & snacks shopping.

And we found this: 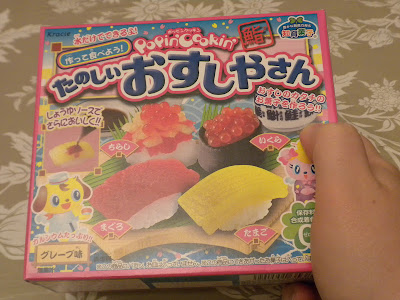 Kit had mentioned she knew where to find these babies, and I had been looking for them forever. Or, you know, at least a year. Ever since I found and became absolutely obsessed with this video. I don't know what  it is, there's just something hypnotic about watching this RRCherriepie make Japanese food kits. When I'm bored, I watch them. When I can't sleep, I watch them. When I feel like cooking, I watch them.

So basically, if I'm at home and awake, there's like a 65% chance I'm watching an RRCherrypie video. 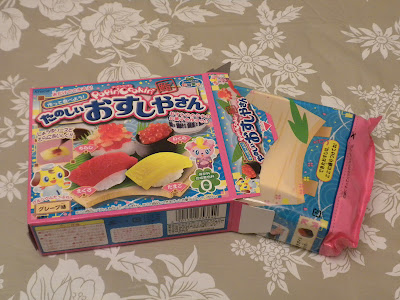 Let's open this baby up. 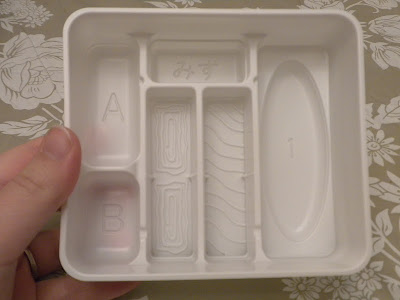 You get a cute little tray to mix and form all your candy sushi parts in. The labels would be super useful here if I could read any Japanese at all. Frankly, being unable to read any of the instructions, I just followed what I saw in the video. I knew there was a reason I'd studied it so closely! 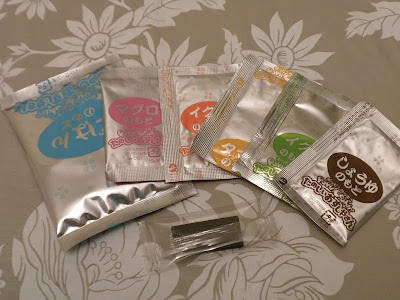 And of course, they give you all the magic candy powders that make up the sushi. All you have to add to the powders is water! Which is pretty amazing.

So I got right down to it, first filling the large oval with water and adding the blue-labelled powder, mixing with the included tiny shovel-spatula thingie until it resembled rice. 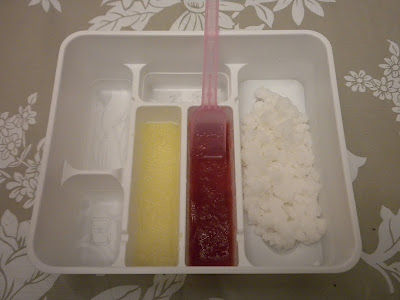 The yellow and pink-labelled powders, when mixed with water, made egg and salmon sushi toppings, respectively. Once that was done, I started forming the rice candy into 5 little rectangles to be the sushi's bases. 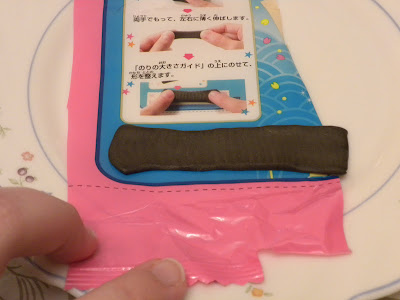 The bit of black candy was slightly malleable, and had to be worked until thin and large enough to cover a rectangular guide supplied on some of the packaging, like so. Then I trimmed it into a rectangle and wrapped it around one of the little rice blobs. 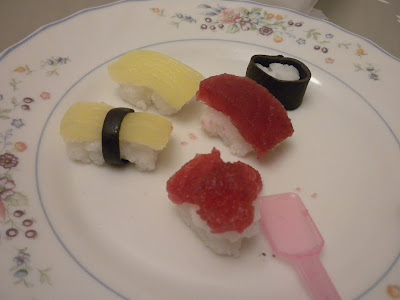 I flipped the toppings very carefully onto the rice. As you can see, it didn't work out perfectly. One of the salmon bits, well, went to bits when I tried to flip it! Probably I didn't let it set up long enough.

Luckily, all this candy is pretty tasty, so it was easy to hide the evidence. 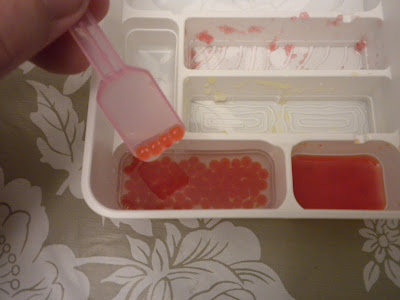 I wish I had gotten better pics of this bit. You use the included little dropper to drop the orange mixture into a solution made with water and the green packet's contents. It forms tiny, tiiiny little candy roe! I just couldn't  get over how cute this was. And think about how tiny this is - look how huge my thumbnail is in comparison to these tiny balls of jelly candy.

Once formed and set, I piled these into the black-candy wrapped sushi's top to form that piece. 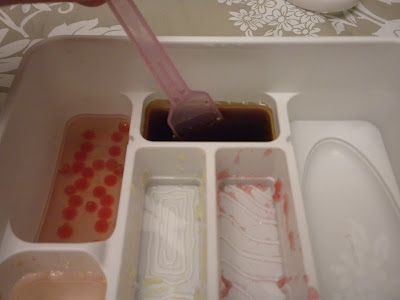 Lastly, I mixed up the brown packet's contents to make candy soy sauce. I had to guess on how to do this one a bit, since RR didn't cover it in his video... I'm still not sure if I did it right. Still, I cannot even explain to you guys how fun this all was. It was ridiculous. 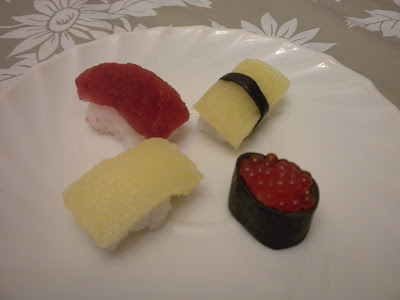 Have a look-see at this! They really look like super-tiny little sushi bites... and they tasted much better than I would have thought, too! If this set hadn't cost me nearly 7 bucks, I would be going back to get more right now.

It did cost seven bucks, though, so uh, I'm gonna leave it at that for now. 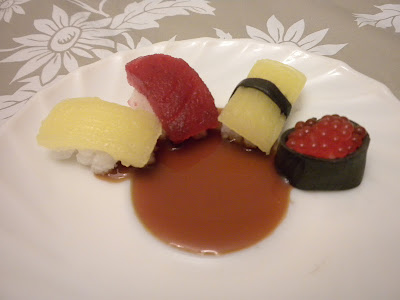 I tried dipping these into the candy soy sauce, and it was the only even-mildly disappointing part about the set. The sauce tasted thin and not very flavorful, but oh well, it was still neat to play with! (And probably I did something wrong to it due to my non-ability to read Japanese.)

If you want to see a true artist put this set together, though, definitely go check out RRCherrypie's Youtube channel and watch his video of this kit. He does stuff with these little kits you absolutely would not believe!

Beware, though, once you start watching these vids, time enters a bizarre sort of slipstream of some kind and suddenly you've watched 42 videos and it's 2 hours later and everything's a blur.

Or maybe that's just me.

Actually making the candy sushi was even more fun than watching the videos, and that is really saying something. What could be more awesome than tiny sushi candy-making?

Tune in Thursday to find out!