Okay, so before we even get started here, you need to know two things. One, this post was made as part of  Dessert for Dudes month started by Bridget of Bake at 350 so check that action out! Much kudos to her for helping to inspire this idea! When she invited her readers to participate, I wracked my brain to think of a culinary delight the men in my life enjoy, and it kept coming back to tacos, so here we are. 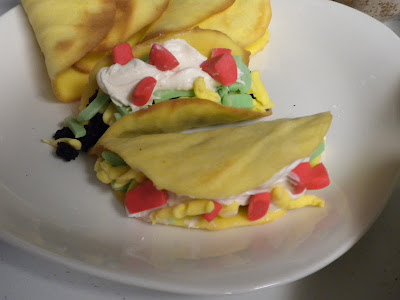 Thing two - I am smack dab in the middle of a 13-day workweek (no joke!) between my two jobs, and haven't had a good night's sleep in ... uh, I'm not sure. So if this post seems a little rushed, I completely blame that! The cool news is one of the reasons I haven't been sleeping is because I've been up late baking... next week I'll have some neato cookies and possibly some (late) Canada Day cupcakes to share so hopefully that'll make it up to y'all. 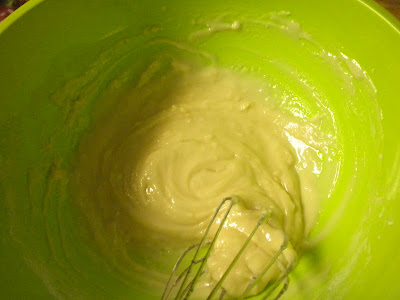 I started off by making a tuille batter for the taco shells. I used the recipe from the Sprinkle Bakes book, but as you'll see, I had some trouble with it, so I don't want to share the recipe just yet until I figure it out properly. But definitely have a look at Heather's book! Everything else I've made from it - including these fruit sushi - has turned out amazing! Tuilles are just a smidge beyond my skill at the moment.

But I digress. The tuille batter has to chill in the fridge for a while, so while it was doing that, I started prepping the other taco parts.


Brown 1 lb of ground beef... Okay, no wait, don't do that. That would be gross in dessert. Instead, buy or bake a 9" chocolate cake and crumble it by hand into a large bowl. I just used a box mix and made 12 cupcakes (because my mom was craving cupcakes that day) and used the rest to bake this one layer. I usually make everything from scratch but, well, this was a bit of a big project and I was on a time limit so sacrifices had to be made!


Just so, and set aside. Now, we have to work on the tuilles. 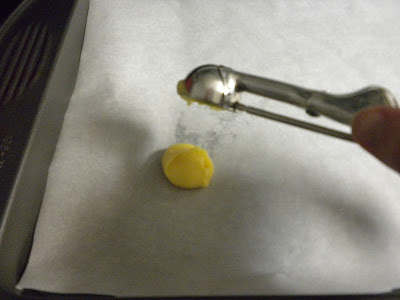 You want about 2-3 teaspoons of batter per tuille, my 1-inch scoop held about 2 teaspoons. Drop them onto a large tray that's been greased and lined with parchment paper. Make sure they're spaced well, because you're going to spread them into circles with a spatula until they're nice and thin. 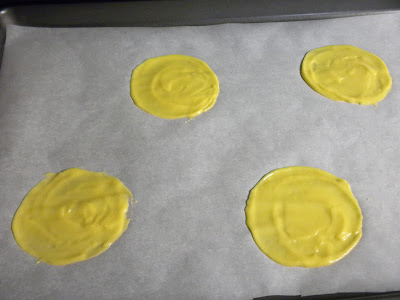 Now, it's possible I spread mine a bit too thin, or perhaps my oven runs a tad hot because... 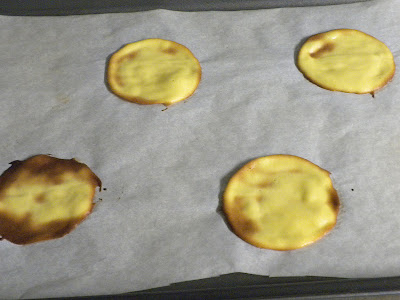 The first two batches came out looking like this. Burnt, crisp, and non-flexible. They have to be flexible, you see, because we need to curve them into taco shell shapes.

So I had to lower my oven temperature a bit and keep a really close eye on the following batches. 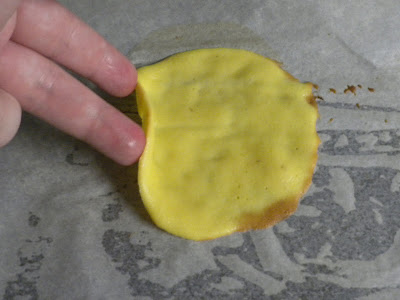 When my tuilles came out of the oven not-burnt, I had to work quickly to fold them into taco shapes. Yes, I burned my fingers a bit, but you have to work while they're hot! Also, my fingertips were fully recovered within an hour of finishing these so it was no big deal, really. 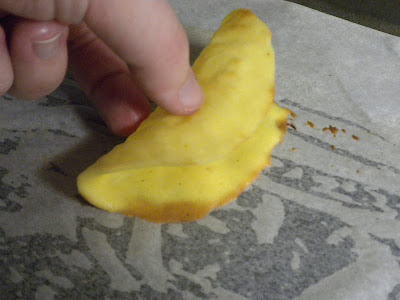 So, fold them over a-la-taco, and then drape them over a greased surface to help hold their shape.


The shell kept trying to fan out when I just draped them over my wooden spoons, so I placed them over some small square dishes and held the shells still with whatever clean glassware I had on hand. Be creative and set up your 'forming station' with whatever you have handy!

The tuilles will cool and hold their shape within a few minutes, then you can remove them and start your next batch. 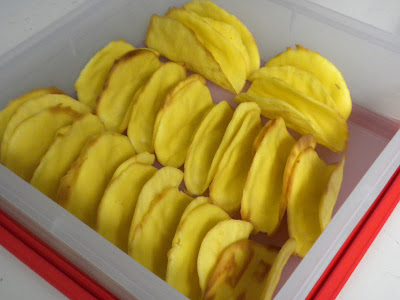 This was actually the end of day one when I made these, so I piled the tuilles into a large tupperware container and sealed them up for the night.

I found that they were a little softer the next day and lost much of their crispness - I don't know if this is because of how I stored them or just because I didn't make them quite right - like I said, still learning tuilles! 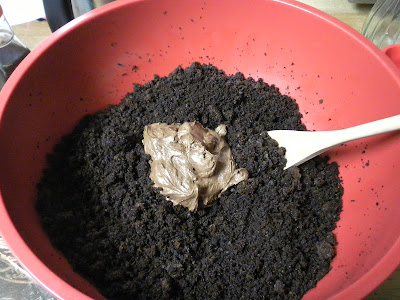 Remember that cake you disassembled? Time to play with it again! For anyone who's ever made cake balls, this will seem familiar. Put a bit less than half a can (or less than a quarter recipe) of frosting in, and mix until it forms a loose dough. You can make this a little less frosting-filled than cake balls since the dough does not need to hold together that well, just enough to resemble browned ground beef. 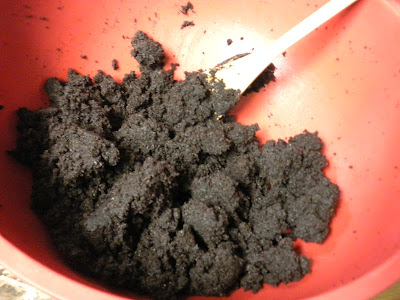 I would like to note that I'd use devil's food cake or another lighter-coloured variety of chocolate cake next time, this came out really dark! 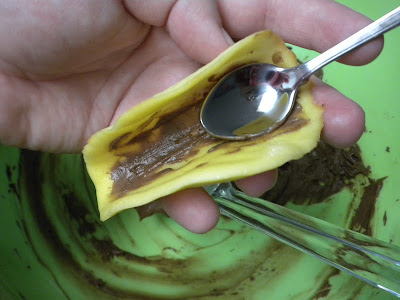 To add your beef to your taco, smear a touch of chocolate frosting in the bottom of your shell to help hold the 'meat' in place. 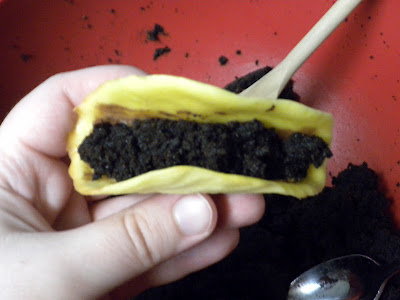 Then press your desired amount of beefy (chocolatey) goodness into the shell, and you have a taco! A... a really plain and boring taco. We need some toppings over here, stat! 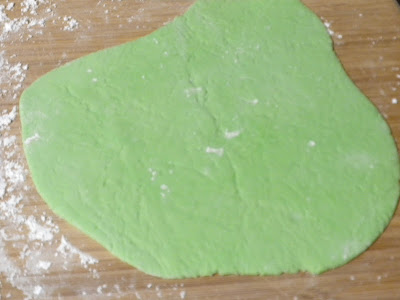 I made shredded lettuce by rolling out green fondant, then laying it over some crumpled-up and then un-crumpled but still textured aluminum foil and rolling it again. Ta-da! Lettuce veining! Then I simply cut thin strips to resemble shredded lettuce.

You could of course, use green-coloured shredded coconut to look like lettuce, but my bro Duck don't abide coconut, so I had to work with what he'd like, of course! 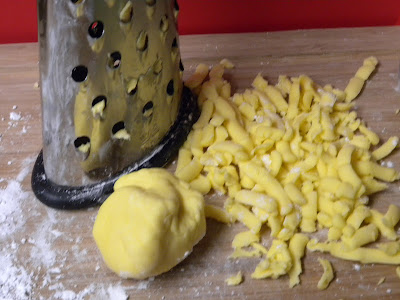 I don't like to toot my own horn too much, but look at the genius displayed here. To imitate grated cheese, simply let a ball of yellow fondant sit out for 10-20 minutes until relatively firm, and grate it just like cheese! When it gets too soft to grate, let it sit again for a bit.

This was super fun and seriously - does that not look exactly like grated cheese?! I also cut up some little spheres of red fondant to make tomato, but that wasn't as successful... If I figure out how to make convincing fondant tomato chunks, I will be sure to inform you! 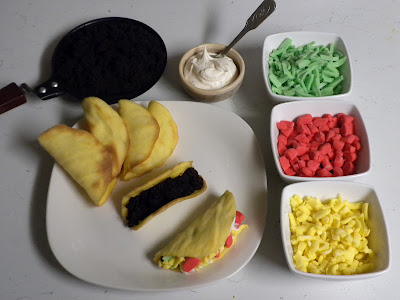 So, lay out all your ingredients, including your adorable tiny frying pan full of cake-meat (that sounds so wrong) your fondant veggies and cheese... 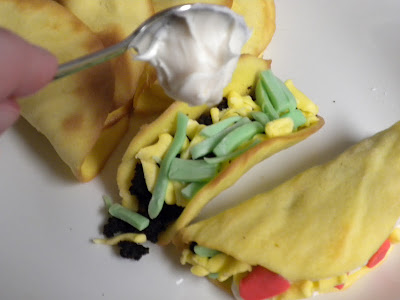 And of course generous dollops of sour cream... Which is, of course, frosting! Cream cheese frosting in this case but you could use any white frosting you like. I totally used store bought here, because you know what? I was exhausted, dudes! These were a lot of steps as it was - by all means, take some shortcuts! 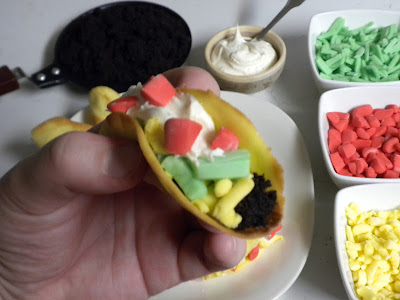 Munch these the same way you'd eat a tiny taco - head tilt and all - and yes, ohhh yes they are messy but that's part of the fun! 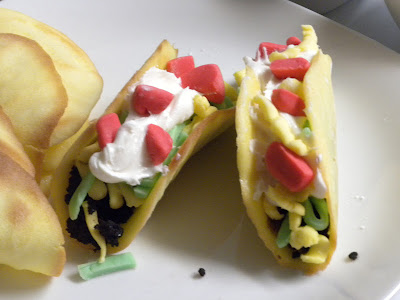 So go ahead, make a dessert taco. Have one. Have two! 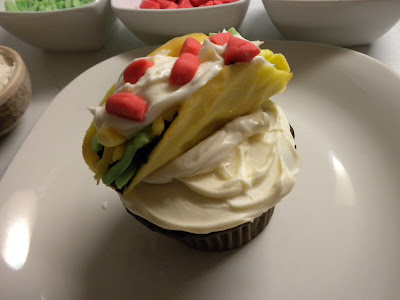 ... Ahem, pardon me. I think I really am a bit over-tired. That doesn't really explain why I stuck one on a cupcake, though, I guess, since I made these last week, but, uh... It seemed like a good idea at the time?

And if anyone out there knows how to make the perfect tuille, or can tell me what I did wrong, please, I would love your input, thank you!

In any case, I hope you'll try something different and creative for the dudes - and hey, even the dudettes - in your life and have a real great time doing it. For more awesome desserts for dudes ideas, keep an eye on the Bake at 350 blog - a variety of bloggers will have their different ideas linked at the end of the month. I'm really looking forward to seeing everybody's contributions!

Another little teaser... Those cookies I've been working on this week? They're for a convention happening this weekend somewhere in the North-East-ish USA. Hubby Jon and Bro Duck are both going, and delivering the cookies for me to some very special recipients. If we're lucky, I'll have some pics of these fine folks to share with you all when the boys return home. The cookies are... well, a dessert for a very specific subculture of dudes, let's say. Any guesses?

Anyway, I've babbled on long enough, and really should get going - I have cupcakes to bake, a bag to pack and hopefully 40 winks to catch before I'm off to work the whole Canada Day holiday weekend at my fireworks shop job. It is gonna be insane! If I survive, I'll see y'all next week.