So... Some of you may have noticed I didn't post anything even mildly Father's Day related.

You see, I had planned to make some awesome sugar cookies depicting all my Dad's favorite things, but then I found out Dad was going to be out of town that weekend. And this weekend. So, I never did make those cookies.

But, I did have Dad on the mind when I found out my workplace was having a cultural day, where we were to bring snacks and treats from our different backgrounds. Dad's side of the family is largely Italian, and nothing says Italian quite like homemade biscotti! 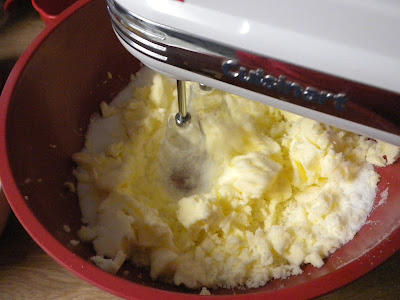 Like most cookies, biscotti start with creaming together sugar and butter. I used a hand mixer to save time, but you could do this by hand. 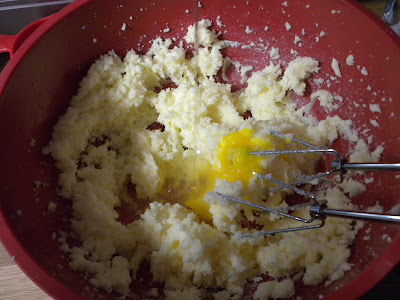 Next add six - yes, SIX - eggs one at a time, mixing in between additions. 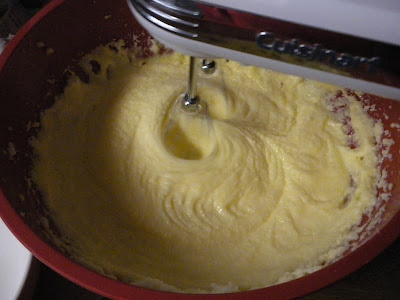 Once all the eggs are added, throw in your flavorings. Some vanilla extract and some... 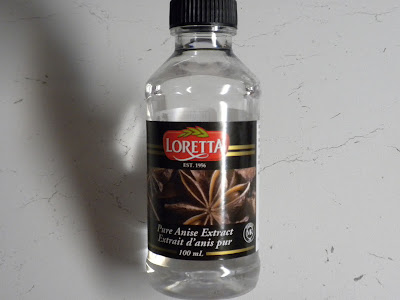 Anise extract. I had never used this stuff in my life. I always heard anise smells and tastes of black licorice, and I hate black licorice! I wish I could remember what comedian it was who said, and I paraphrase:

"Black licorice - what is that, sugar and hate?"

Yeah, something like that. But, every biscotti recipe I saw had anise in it in some form, and I wanted these to be as authentic as possible, so I went ahead and threw some in.

My apartment smelled like anise for the rest of the day. Augh! Oh well. 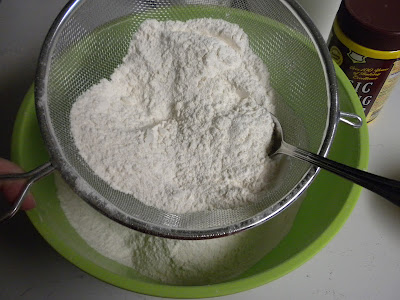 In a separate bowl, sift together your dry ingredients - flour, salt and baking powder. 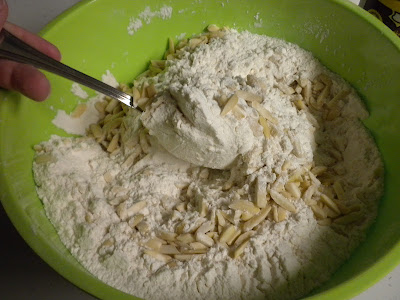 Then, toss in some slivered almonds. Finally, throw the dry ingredients into your bowl of eggy sugary buttery anise-smelling mess. 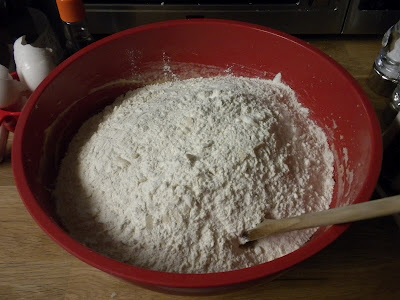 You can start mixing it by hand, but toward the end you may need to get in there with your hands to be sure all the flour gets incorporated. 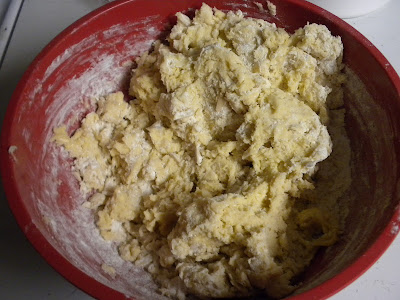 The dough stays sticky, so, be prepared to have gooey dough hands. Gooey, anise-smelling dough hands. 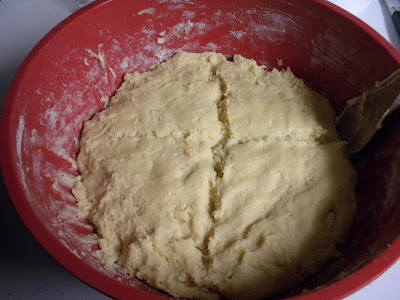 Once your dough has come together, divide it into 4 portions... 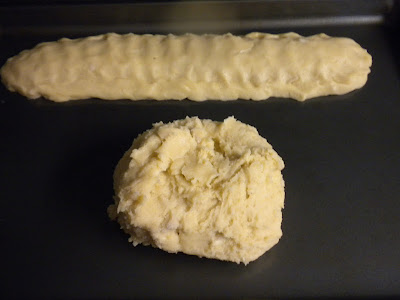 Plop 2 portions each out onto a large baking sheet, and form into semi-flattened log shapes. Then bake at 350 degrees for 25-30 minutes. 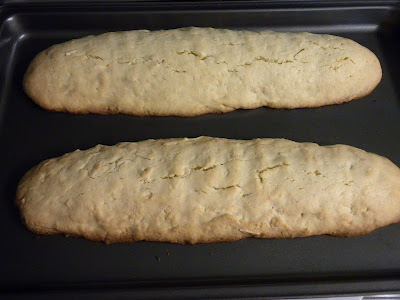 When they come out of the oven they should be golden and just starting to brown around the edges. While your second pan is in the oven baking, and while these first logs are still hot, there is more work to be done! These ain't biscotti yet. 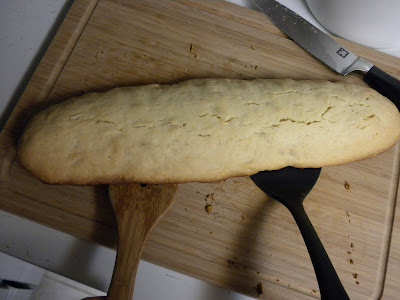 I used 2 large spatulas/lifters to move the hot loaf of cookie to a large cutting board. Then, cut it into diagonal slices ~ 1/2 inch thick. 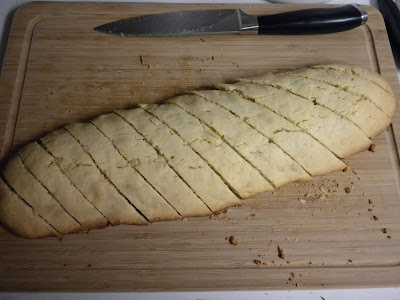 Like so. Repeat for the other baked loaf, and arrange the slices on their cut sides back onto the baking pan. 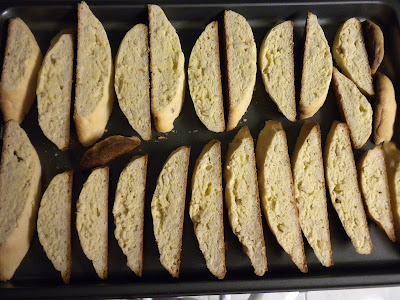 Once your second batch of loaves is done, pop these into the oven again for about 7-10 minutes. 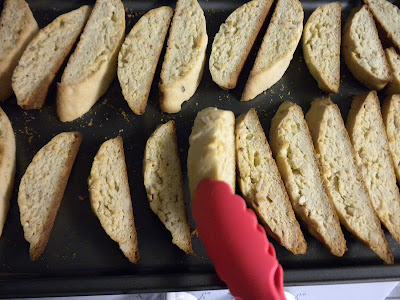 Pull 'em out, flip 'em all over, and put them in the oven yet again to toast the other side for another 7-10 minutes. Do the same for all batches and you're done.

My friends, you have biscotti! But why stop there? 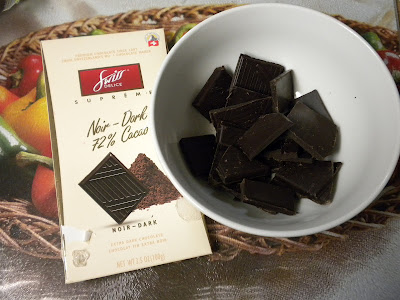 Why not use up that amazing dark chocolate you got as part of a gift basket and have been saving for just such an occasion? (Or, you know, go buy some chocolate if you didn't get a gift basket, I guess.)

I just put this in the microwave on high for 20-30 second intervals, stirring in-between, until it was liquid enough to drizzle. 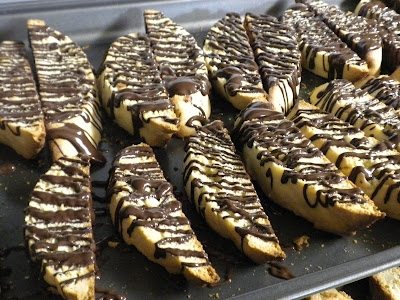 And drizzle I did! There was enough chocolate to cover just over half the biscotti, but I had intended to leave some plain, anyway, since I was taking them to work to share and not everyone likes dark chocolate.

They don't know what they're missing! 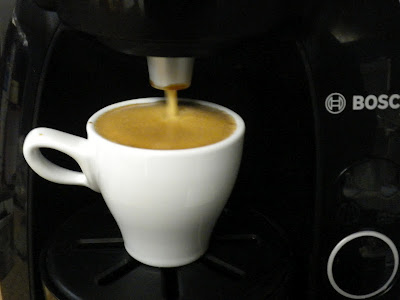 As long as we're feeling Italian, let's fire up the espresso machine and brew a tiny, tiny cup of hyperactivity juice! 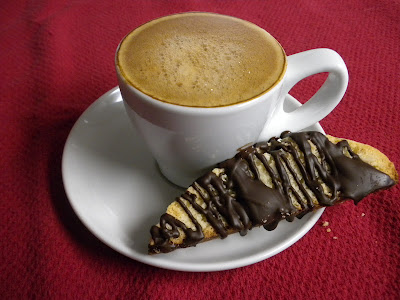 Now if that don't fuel your morning, I don't know what will. 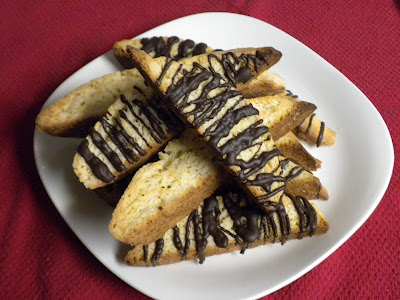 Except maybe more biscotti! I must say, though the anise flavor is present, it is not overpowering, and is a lovely complement to the vanilla and almond notes, so don't skip it! Even if it does stink up your kitchen for several hours. It's worth it.

I used this recipe, but added the chocolate drizzle because... well, nobody tried to stop me. Everything's better with chocolate! A couple of notes on the recipe, though:


So, take a stab at biscotti! It's time-consuming but not nearly as difficult as I thought it would be. Also, some of my co-workers are now complaining that the coffee shop biscotti tastes awful now, and it is all my fault. So beware of that.

Side note: I have something put together for Bridget's Dessert for Dudes Month, but that's for next week, so be sure to check back! In the meantime, check out all her awesome for-dudes-or-otherwise ideas at her blog Bake at 350.