Yes, Canada Day was well over a week ago, I know.

But it is never too late to love my country! Especially in cupcake form. 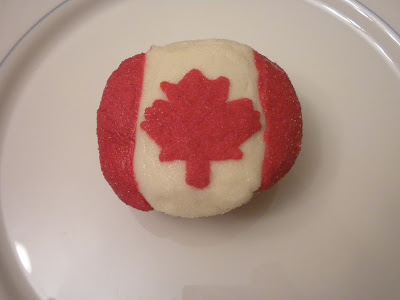 Cheesy patriotism aside, there are a couple of reasons I'm sharing this so late. One is that I actually made these after Canada Day. The boys were away at Bronycon that entire weekend, as I may have mentioned briefly. So I whipped these up the day after Canada Day to be ready for their homecoming.

I also threw some welcome home messages on the leftover sugar cookies for the boys to munch.

Now, I can't take credit for any of these photos, since hubby took them for me. I may or may not have burned my thumb extremely painfully while lighting fireworks for our (also a day late) Canada Day display and couldn't really handle the camera just then. 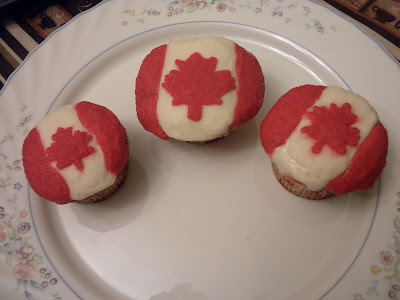 I also don't have how-to pics, because hubby took the camera with him on the Bronycon trip! (Kind of another reason this is so late... I was originally not going to make this post at all since it's so lacking in photos!)

So I'll try to explain the icing technique as best I can... I made a basic vanilla buttercream and tinted about half of it red. Then I piped a stripe of un-tinted white frosting down the middle of each cupcake and used a small off-set spatula to smooth it a bit. Once it was as smooth as I could get it, I piped the red frosting on either side to resemble the red fields of the flag, and again smoothed things out with the spatula.

To try to get an even smoother finish, I pressed and rolled the cupcake tops in granulated sugar.

Finally, I freehand-piped red maple leaves onto the white fields to complete the Canadian flag look, and pressed it into the sugar again, gently, so the whole top of the cupcake sparkled subtly. 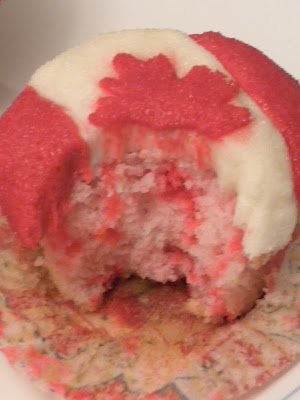 Inside, as you can see, was white cake with red confetti. Much like I've done before, I simply folded some sprinkles into my favourite white cake recipe. Only this time, I actually kept control of myself and measured the sprinkles properly. The cake part turned out just perfect!

I should mention that the frosting technique I used was inspired by these awesome snow cone cupcake by Bakerella. Seriously, how adorable are those?? Anyway, I'd really like to do something like this again to better refine the technique, but as is, these were a nice welcome home surprise for homecoming hubby and bro. 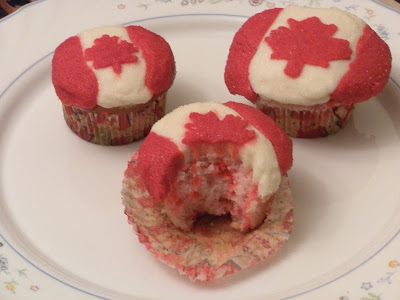 What did you do for Canada Day? Or the Fourth of July? Or your country's own special holiday? I've lived my whole life in Canada and I hardly travel, so I'd love to hear how other countries celebrate their independence or founding anniversary holidays or what have you!

Next week, I'll share my attempt at whoopie pies, which will be a much longer and more in-depth post!